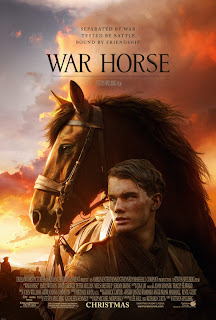 War Horse tells the story Joey the horse and Albert (Jeremy Irvine), a young lad who is his fiercest champion.  The movie is also about their strong friendship, one which withstands even the most direst of situations, war.

If you think about it, the movie is mostly presented from the point of view of Joey, who becomes a silent spectator as various men in power decide his fate.  At a young age, he is taken away from his mother, but thankfully he is bought by Albert's father.  He is not the kind of horse needed for hard labor at a farm but Albert sees more in him.  He sees the real potential in him.  As Albert and Joey learn about each other's ways, they become firm friends.  But the world is fast changing and war forces England to send its young men to fight to protect its freedom.

In these tough times, Joey becomes a solution to the Narracott family's financial woes.  Here it is that Joey and Albert must separate as Joey is sold towards the war effort to a captain but it is not without a promise from Albert that they will find each other again one day.  From there onwards, Joey goes over to the frontline passing along from master to master and even a little French girl who renames him Francois for a young boy she liked.  Cruelly, he is separated from the ones who see how special he is, who are in awe that a horse has survived this long when all other horses have given up or been killed.  But he is a miracle horse and I am pleased to say that he gets and deserves his happy ending without revealing much of the actual plot.

This film is typical Spielberg at his best, through and through.  It has the gritty battle scenes showing us the harsh realities and grimness of war.  And it contains the emotional bond forged between a young boy and his horse which sustains us throughout the whole film.  It's their journey to make but we are swept alongside them.  World War I changed the continent of Europe and Spielberg shows the effect it had on the soldiers from both sides, for a captain in the English army, to a young German medic soldier, to brave Privates (on both sides of the trenches) who risked their lives for a horse.  All these types of people were part of Joey's journey as he just tried to survive in a war environment, a real war horse.

But this is not all Spielberg.  Yes, this film is his vision but all the departments have done such a wonderful job of making the film look like a masterpiece.  John Williams' soaring score, the costumes, the sets, the sound, the editing and mainly Janusz Kaminski's (Spielberg's long-time DP) gorgeous cinematography all came together for some outstanding work.  Some of the scenes especially of the Devon countryside and the sunset look like spectacular paintings.  A special mention, too, of the vast cast involved in film.  The young lead, Jeremy Irvine, is very earnest and appealing and the large British cast of Peter Mullan, Emily Watson, David Thewlis, Tom Hiddleston, Benedict Cumberbatch all play their parts well and leave an impact.  Also extremely touching are Niels Arestup and Celine Buckens as the Grandfather and Granddaughter who briefly become Joey's owners.  But the real star of the film is Joey who is the real reason we watch the film.

This coming Sunday, War Horse is nominated for Best Picture alongside a few other categories too.  And while it may not win the big prize, it is certainly deserving of the nomination.

Directed by Steven Spielberg; Screenplay by Lee Hall and Richard Curtis; Based on the novel by Michael Morpurgo; Cinematography by Janusz Kaminski; Editing by Michael Kahn and Music by John Williams.