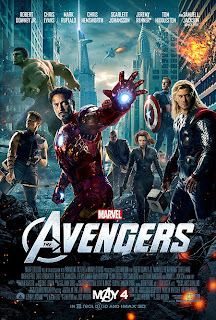 The Avengers is the first co-production between Disney and Marvel and expectations are high.  After the lackluster collection of John Carter at the box-office, The Avengers has to be the start of a successful franchise.  The marketing for this film has been much better (and everywhere).  It's been hard to escape the posters, trailers and images on TV, the internet and around every corner.

Getting back to the review, The Avengers opens with Loki capturing the Tessaract (the glowing blue box first found in Captain America) from Nick Fury (Samuel L. Jackson) and his S.H.I.E.L.D team, also managing to kidnap Hawkeye aka Clint Barton (Jeremy Renner) and Dr. Erik Selvig (Stellan Skarsgard), previously from the Thor universe.  This worries Fury immensely and he sets out, along with the spy-for-hire Black Widow (Scarlett Johansson) to recruit Tony Stark (Robert Downey Jr.), Bruce Banner (Mark Ruffalo) and Steve Rodgers (Chris Evans) into the Avengers Initiative to fight against Loki.

After some persuading, they eventually come aboard the superhero control center in the sky and get to know each other.  This is putting it nicely as some of the superheroes (We're looking at you, Stark) don't "play well with others" and are naturally wary of each other's presence.  A run-in in Germany with Loki leads to the Avengers first banding together to bring him back to the sky lair.  But he manages to escape and bring the fight to New York city and Stark Towers. Ah, poor New York, a city that gets battered through alien attacks, superhero fights, end-of-the world disasters and even Godzilla.  This time around, there are aliens from another realm (Loki's army) and six superheroes to make it into their personal battleground.

The Avengers is a fun start to the summer blockbuster season filled with action and adventure to satisfy any movie fan's superhero appetite.  This is a superhero film times three.  Directed by Joss Whedon who handles the difficult task of making sure that all of these superheroes (most of which have their own film franchise) don't get shortchanged and receive enough screen time.  This being a Whedon film, the characters all spout quippy dialogues and don't spend too much time feeling sorry about themselves and get on with the action.  Most big special effect blockbusters (Green Lantern, the Star Wars prequels) suffer from bad and cheesy dialogue but not this film.  I enjoyed the first interactions of Captain America and Tony Stark with Thor (Chris Hemsworth).  Basically every line out of Stark's mouth was a gem, from calling Hawkeye "Legolas" to addressing Loki as Reindeer Games.  Agent Phil Coulson (Clark Gregg) also got some big laughs in his role.

I saw this film at an advance fan screening so the audience reaction was pretty positive.  Throughout the superhero introductions during the film, Thor got the biggest claps but the loudest cheers were saved for Bruce Banner's The Hulk.  I must say, this is the Hulk we fans were waiting for.  Mark Ruffalo's portrayal is the best Hulk out of the bunch.  I loved how the Hulk was allowed to finally be himself in the climatic sequence.  "Hulk...Smash!" He sure does.

Robert Downey Jr. plays Tony Stark with such ease, it's almost like his second skin.  It was also nice to see Pepper Potts (Gwyneth Paltrow) and Jarvis (Paul Bettany) make a brief appearances as Stark's support team; we'll see them again in Iron Man 3. Captain America and Thor fit in well with the rest of the Avengers but you know the good stuff is yet come in their respective upcoming sequels.  Natasha Romanoff aka Black Widow kicks major ass as the lone female fighter in the group.  She fits right in and I had major Buffy flashbacks at some moments.  While Hawkeye spends the first half on Loki's side before coming, literally, to his senses.  His archery armor would make Katniss Everdeen very envious.

The supporting cast, namely the S.H.I.E.L.D team of Nick Fury, Maria Hill (Cobie Smulders) and Agent Coulson don't get to join in as much of the action as the heavy lifting is done by the Avengers team.  The villain of the piece is Loki, brother of Thor and presumed dead at the end of Thor.  We know they rarely stay dead long.  Besides, he's a god as he tells the Hulk.  It leads to my favorite scene in the film which I will watch on repeat when I get the DVD.  Basically, any scene with the Hulk was my favorite.  I think the fans will definitely demand a new Hulk movie.

But back to Loki.  Denied a kingdom of his own in Asgard, he wants to rule over Earth.  The Avengers team will make sure that won't happen.  Tom Hiddleston plays Loki with a evil smile ever present.  He relishes the role of the baddie given to him.  Stay tuned until after the credits roll for the post-credits scene which has now become mandatory for franchise films.  Overall, The Avengers is great fun and the 3D works extremely well in the battle sequences.  Make it a must-view to start off the summer.