The Golden Globes can be a great many things but you can't deny their entertainment factor.  Hostesses Tina Fey and Amy Poehler's funny monologue started off the night well signaling that unlike previous years, the host wouldn't alienate the audience at home and in the ballroom. And as always, it gave us great moments from Jodie Foster's incredible speech to surprises win in significant categories by Argo and some not so great moments (the HFPA president's speech comes to mind). 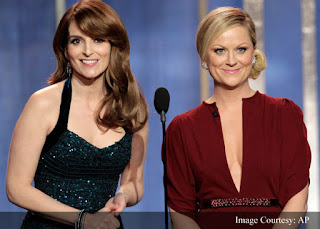 The two Oscar frontrunners, Lincoln and Life of Pi, walked away with only one award each while Les Miserables and Argo gained some momentum.  The acting awards also seemed to lean a certain way except in the Best Actress category where a 85-year-old and a nine year old could have some say come Oscar night.   The hardest category to predict, for me, will be Best Director.

Highlights for the night for me was probably anytime Tina and Amy were onscreen (could they present the awards to everyone next year?), Will Ferrell and Kristen Wiig showing their hilarious knowledge of Best Actress in a Comedy or Musical category ('You get out of here!') and unofficially auditioned for next year's hosting gig, Adele's joie de vivre to former President Bill Clinton presenting the clip to Lincoln (I really thought Lincoln had it in the bag right then.)

And the line of the night belonged to Poehler who exclaimed, "Wow! What an exciting special guest! That was Hillary Clinton's husband!" as the former president left the stage.  Yes, Amy, he really was.

Let's see the Oscars try to top that.

The winners listed below:

Best Performance By An Actor in a Motion Picture - Drama
Daniel Day-Lewis, Lincoln

Best Performance By An Actor in a Motion Picture - Comedy or Musical
Hugh Jackman, Les Miserables

Best Performance By An Actress in a Supporting Role in a Motion Picture
Anne Hathaway, Les Miserables

Best Performance By An Actor in a Supporting Role in a Motion Picture
Christoph Waltz, Django Unchained