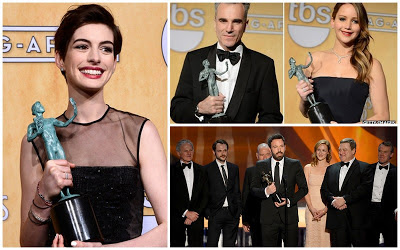 What do you know? Argo does it yet again and is going full speed ahead with Oscars clearing in its sight.  We also got some insight into the frontrunners for the categories not named Best Actor (Daniel Day-Lewis has gotten that tied up with a bow) with Jennifer Lawrence, Anne Hathaway and Tommy Lee Jones looking like they might repeat on February 24th as well.  But I don't know why but something tells me if any acting category is going to yield a surprise, it's going to be Best Actress.  But yesterday night's biggest surprise was definitely Argo winning best ensemble which looked to be Silver Linings Playbook second big win of the night.  But no, it was Lincoln who won two awards with Argo, Les Miserables and Silver Linings Playbook joining in on the spoils.  This year's Oscar race has brought the expected with momentum changing all over the place. Who will prevail in the end?

And the winners are:

Outstanding Action Performance by a Stunt Ensemble in a Motion Picture
Skyfall (Columbia Pictures)
Posted by Sonal at 11:50 PM