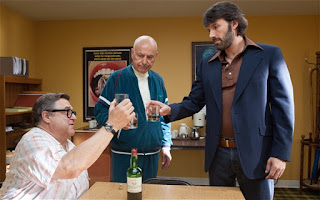 After the Toronto International Film Festival, Roger Ebert wrote Argo will be the winner of the Best Picture Oscar and now with four weeks to go until D-Day, it's suddenly coming up all roses for Argo.  Winner of the last three big awards, the Critics' Choice, the Golden Globes and now the Producers Guild, welcome to frontrunner status, Argo, you've officially galloped ahead of Lincoln and Zero Dark Thirty.  Congratulations to Wreck-It Ralph for winning Best Animated Film, Walt Disney Studios is back to regaining its name as the leader in animation and to Searching for Sugar Man which is now a good favorite going into the Oscar race.

Here are the film winners from The Producers Guild of America:

The Award for Outstanding Producer of Animated Theatrical Motion Pictures