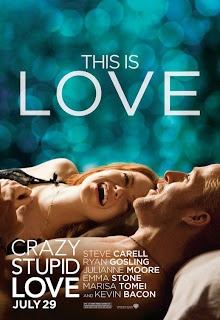 What is the reason why we watch rom-coms? Over the years, there is a certain pattern of predictability to them that we've come to expect. Same reason why I may chose to watch a movie like Notting Hill a weekend when you've got nothing to do is because they are like comfort food.

But once in awhile there comes a movie that throws all the rules out and presents you with something quite original.  Crazy, Stupid, Love is that movie.  I can't remember when I had such a good time in the theater (read: laughed out loud at actual jokes). This a movie that you have to watch with an audience because the audience reactions to what goes onscreen are just as entertaining.


Crazy, Stupid, Love is about the dissolution of a marriage, not something you'd expect in a rom-com but it works here.  Julianne Moore's character Emily opens the film by asking for a divorce and the film moves ahead to show us how they both handle the separation.  Steve Carrell's character Cal is a bit of sad sack at the beginning, who's completely thrown for a loop by this announcement and suddenly takes to hanging out a trendy bar where he clearly is out of place.  Jacob (Ryan Gosling) notices him and decides to take him under his wing to make be a man again. Here comes the fun part of the movie, the sequences of Carell's makeover are very well-done comically.  He then emerges a new man and tries to win back his ex-wife.  It doesn't go very well, bad for him and funny fodder for us. And, oh yeah, Jacob also meets his match in Hannah (Emma Stone).

There are other sub-plots running through the film that tie itself very neatly to the ending. I don't want to reveal anything here, it will ruin your viewing pleasure.  Though I must say, it was quite impressive, I never saw it coming.  I was so engrossed in the film. The movie has effortless performances by its starcast in particular Carell and Gosling. You'd never think them to be a team together, but it totally works here. Gosling is usually such a serious actor otherwise, one would never think to find him in a movie like this. But he really commits to his role. I really enjoyed this film and I'd say if you're only going watch one rom-com this year, watch this one!

PS-My funniest scene of the film, the girls in the audience actually gasped out loud at this. Ryan Reynolds, you have officially been dethroned for best movie abs by Ryan Gosling! Sorry, but look at them.