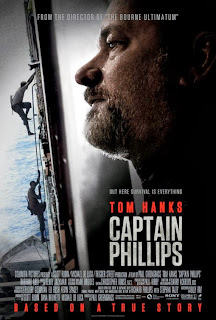 Whenever I see the tagline, 'Based on a true story,' my interest is always peaked.  Captain Phillips is based on the experiences of Captain Richard Phillips in his book A Captain's Duty.  In April 2009, en route to Mombasa on a routine voyage as captain of Maesrk Alabama, Phillips faced a hijacking attempt that lead to him being held hostage by four Somali pirates.

I should point out that playing the role of Phillips is Tom Hanks who played the everyman hero before in films.  His portrayal of a captain trying to protect his ship and crew is the main reason to watch the film. The second is leader of small band of pirates, Muse (Barkhad Abdi) who has real purpose in his actions from the first moment we see him onscreen.  He holds real malevolence his eyes as he has a determination to prove himself and really hijack the American ship.

The standoff between him and Phillips as they both try to accomplish their goals is fascinating. Captain Phillips tries to get him to see reason while Muse indirectly gives his backstory while they talk.  He's also trying to get by and make something of his life.  These sequences had the most impact in this story for me.

The film opens well with parallel storylines of Phillips and Muse building towards that eventual meeting on the ship when the Somali take over the ship.  The tension builds and builds until the standoff where eventually Phillips is taken hostage in the lifeboat by the pirates.  Here I felt the sequences went on a little too much for me. It could also be that because of director Paul Greengrass' documentary style of jerky shots and closeups in the tight space of the lifeboat became too claustrophobic and I had quite the headache afterwards.

With much of the action on the choppy seas and the moving camera did not gel well together for me.  In fact, when the action moved to the US Navy and the SEALs getting involved, the movie began to shift focus again. The film is strongest when it features on Abdi and Hanks.  Many will be surprised to find sympathy towards the pirates in certain scenes as well.

There are many such instances of piracy that get featured on news stories in television and newspapers. But seeing it unfold over the screen is a bit of shock as how these pirates in small boats can overpower a ship as big as the Maesrk Alabama. Just as shocking is the way in which the hostage situation eventually ended.  Tom Hanks delivers yet another strong performance in his career, if you see the film, it should be for his and Abdi's performances.


Directed by Paul Greengrass; Written by Billy Ray; Based on the book by Richard Phillips and Stephan Talty; Cinematography by Barry Ackroyd; Editing by Christopher Rouse; Music by Henry Jackman