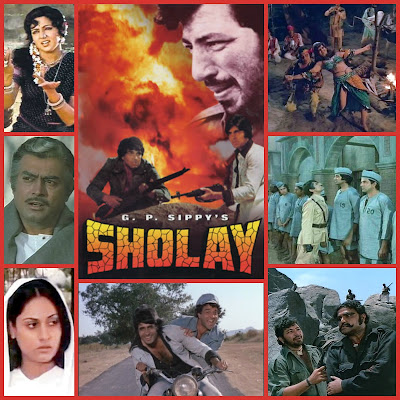 Sholay is like a rite of passage if you're Indian.  You have to see it and if you don't you'll get a horrified look with an exclamation, "You haven't seen Sholay!"  I've been guilty of this myself and while I have seen Sholay before, I had never experienced it on the big screen.

Yesterday though I crossed that off my list.  And what an experience it was.  From the first reel, nay, when the censor certificate first showed up on the screen, the hoots and whistles started.  Directed by Ramesh Sippy, Sholay is a story of a classic yarn of revenge, obsession and an good old-fashioned friendship between two rogues.  Starring legends of Indian cinema, Amitabh Bachchan, Dharmendra, Sanjeev Kumar, Amjad Khan, Hema Malini and Jaya Bhaduri, the film is so popular that to this day, the songs, dialogues and scenes are etched forever in people's minds.

The comedy still makes me laugh, the songs are still as hummable as ever and the story (an everlasting script by writers Javed Akhtar and Salim Khan) still makes you gasp even if you know what's coming.  If you've never seen Sholay, make haste and watch this evergreen classic, which is quite long, will entertain you and give you your money's worth.