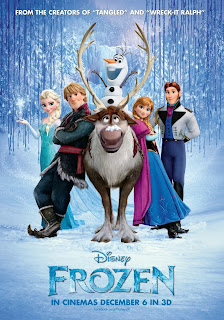 Walt Disney Animation's latest theatrical release Frozen is a wonderful mix of its own esteemed animation history and a positive step forward into its future.  Co-directors Chris Buck and Jennifer Lee were tasked with bringing to the screen the difficult tale of Hans Christian Andersen's The Snow Queen, a story even Walt Disney couldn't see to its completion. However, by adapting it and making the heart of caper about two sisters who just really need to learn how to communicate with each other, the makers have successfully made one of the more endearing and enchanting stories to come out of the legendary studio.

As young princesses of Arendelle, Elsa and Anna are like any young little girls who love to play. Except Elsa has a secret that her parents don't want to the public to know, that with a touch of her fingers, everything turns into ice and snow. One night, Elsa accidentally freezes little Anna's head, making a long lock of her hair turn white. With the help of some wise trolls, her parent are in time to reverse any wrongdoing by erasing any memories of Elsa's special powers.

But this leads to a long and deep rift between the two sisters.  Elsa spends her formative years in a self-imposed exile to protect the world from her powers while Anna grows up yearning for her elder sister. When their parents are lost at sea and the sisters become orphans, it soon becomes time to Elsa to be crowned Queen of Arendelle.  But at the coronation and celebration, things go horribly wrong as Elsa and Anna don't see eye to eye, causing Elsa to flee Arendelle forever.

As she does, she leaves a kingdom trapped in an eternal winter wonderland. It's up to Anna to find her sister and undo the magic she has left behind.  Until then, the story was bumping around in predictable Disney animation territory. I thought I knew what was going to happen next. But the story moves forward with wonderful twists and turns.  We are introduced to some wonderful characters like Kristoff (voiced by Jonathan Groff) and Olaf (voiced by the perfectly cast Josh Gad).  In fact, Olaf is competing for best animated character of 2013 in my books. Josh Gad's Olaf is absolutely terrific as the hopeless snowman who longs for summer days. Silly snowman!


But the real stars of the film are its leading ladies, Elsa (voiced by luminous Idina Menzel) and Anna (voiced by Kristen Bell) who are behind the real emotional core of the story and whose performances make the story soar. Their characters are beautiful animated as they show their vulnerabilities and strengths. Here are two Disney princesses who are strong role models for the new generations of little girls growing up as well as older generations who have grown up on Disney animated films. And it's never more evident as in the song "Let It Go", a sequence featuring Elsa that gave me goosebumps and whose lyrics are empowering in so many ways.


The music by Christophe Beck and lyrics by Robert Lopez and Kristen Anderson-Lopez (from Broadway's Avenue Q) are first class and retain the usual tropes of a musical while maintaining its own originality. Directors Buck and Lee (who also wrote the screenplay) have made a wonderful animated feature, one which stands tall and is one of the best animated films to come out of Walt Disney Animation (alongside last year's Wreck-It Ralph).  If you see one animated film this year, watch Frozen.