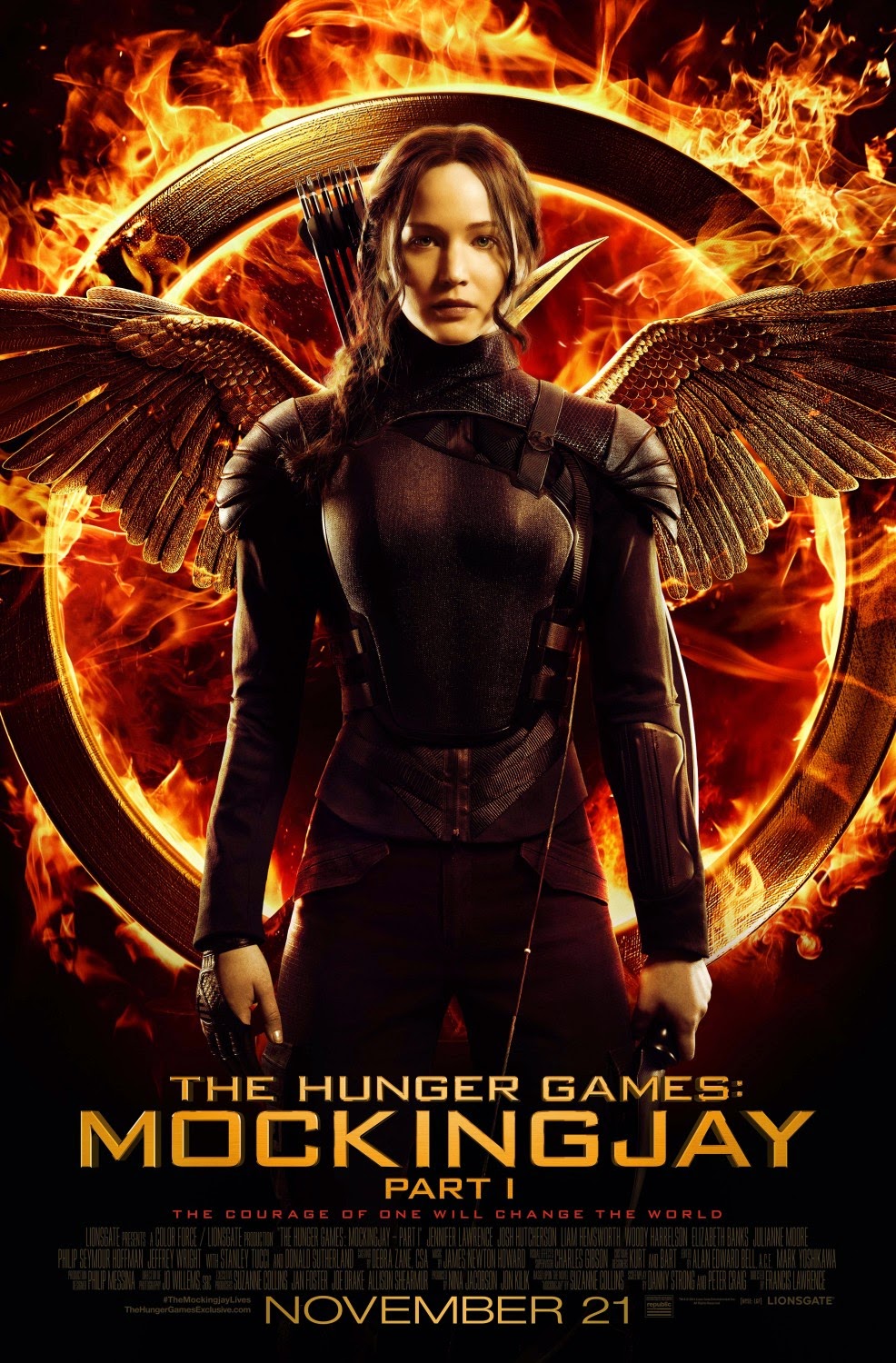 Watching The Hunger Games: Mockingjay Part 1, it struck me how faithful to the book and the characters the movies remain. More so than even the Harry Potter series. Don't get me wrong, I thought the Harry Potter movies were great but I was always glad I had the books to return to.

In the case of The Hunger Games, no little detail goes unmentioned. And the characters remain true to the books. I could see Jennifer Lawrence as Katniss wrestle with her inner demons and fears just as I could imagine Katniss struggling in the books. I've said it with the previous films as well that Lawrence is the glue that holds the series together. We are centred through her experiences in this journey to make it to the other end, alive.

When we last left Katniss rescued by the rebels from the Quarter Quell had just been told that her district, the only home she's ever know, has been destroyed and she's now in District 13. Needless to say, Katniss has many questions and so do we. Here in 13, President Alma Coin (Julianne Moore) is in charge, flanked by Plutarch Heavensbee (the late Philip Seymour Hoffman) and Beetee (Jeffrey Wright). They try to convince her to join the fight against the Capitol but Katniss refuses to budge until she knows what happened to Peeta (Josh Hutcherson).

Of course, Katniss does agree to be their Mockingjay eventually once she realizes she can bargain with Coin for Peeta and the rest of the tributes' lives.  From therefore, we are launched into a full-fledged uprising as the citizens and top brass of District 13 try to reach out to the other Districts to unite against President Snow (Donald Sutherland).  Snow is just as callous and evil as other film installments of this series. While he wants to quash the rebels, he is also involved in a battle of wills with Katniss.  He knows her deepest fears and attacks them ruthlessly.

We are also updated into the lives of the other non-Tribute characters.  Effie Trinket (Elizabeth Banks) is reduced to wearing grays, a colour that she probably knew existed.  Primrose (Willow Shields), Katniss's younger sister, is training to be a doctor.  And Gale (Liam Hemsworth) is training for war.

War is completely at the forefront in this film.  Katniss is held up by Coin and Heavensbee as the symbol of hope, the reason to keep fighting.  As we read about citizens protesting for basic human and civil rights around the world in 2014, the events of Mockingjay set in probable dystopian future does resonate.  Could this be the future we one day inherit if we are not careful? This does require a lot of pondering.

However, the Mockingjay Part 1 is setting up the scenario for the final battle. And leaving a lot of questions up in the air.  How will Katniss get her Peeta back? How will the Districts rise up to take down the Capitol? What will their future entail? And will any of them make it out alive?

The A-list cast (most of them Academy and Emmy winners and nominees) are top-notch.  I thought the scenes negotiating Katniss's Mockingjay terms with Moore and Hoffman were wonderful. The film is dedicated to Philip Seymour Hoffman, he will deeply missed.  Moore is a welcome addition as the unreadable but tough President Coin.

Jennifer Lawrence knows Katniss like a second skin, Katniss is much more vulnerable in this film, she not only has to worry about her friends and family. She now holds the burden of what happens to other Districts as well.  Woody Harrelson as Haymitch is completely underused and I wanted more scenes with Effie, she brings some humour to very serious film.

Director Francis Lawrence is much more comfortable in the world and characters in his second film in this series and it shows.  The details of the underground world of District 13 were just as I imagined them while reading.  Though aboveground, District 13 boasts of lush green forests and soothing rivers, it wasn't quite the broken, barren District reduced to rubble from the books.  Most of the cast also spends a majority of time in dull grays, browns and black uniforms.  Those eye-popping costumes from the previous films, (RIP Cinna), are sorely missed as well.

Fans of The Hunger Games series will no doubt like the film but like I rushed through reading Mockingjay in one go when I got the book, I wished the film wasn't broken down into parts. But then again, it does leave you wanting more.

Directed by Francis Lawrence; Screenplay by Peter Craig and Danny Strong; Based on the novel by Suzanne Collins; Cinematography by Jo Willems; Edited by Alan Edward Bell and Mark Yoshikawa; Music by James Newton Howard