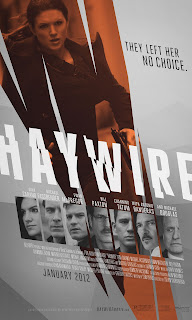 Haywire is one of those movies that went by so fast when it was all over, it still felt like unfinished business.  I still wanted to hang out with Mallory Kane and see what else she gets up too.

Mallory Kane (Gina Carano), bruised and banged up, arrives at a diner and barely has time to sip her coffee when she realizes trouble comes knocking.  Her associate Aaron (Channing Tatum), who looks annoyed and barely awake, has come to take her with him to meet the boss.  Apparently things didn't turn out well at the last assignment.

What assignment you say?  Wait, Mallory will explain it all in a convenient flashback as she fights Aaron, breaks his arm, takes a young hostage Scott (Michael Angarano) and goes on the lam.  Driving the car belonging to Scott, she tells him the backstory on how she got there.  She aids the American government as a private contractor for covert operations.  There was a mission in Barcelona where she thought she was rescuing a Chinese dissident being held hostage.  And then Kenneth (Ewan McGregor), who she works for, sends her to Dublin for yet another "assignment".

Except it's a trap.  She's there to meet Paul (Michael Fassbender), a MI6 agent, and complete the mission together.  But Paul's really there to eliminate her as part of the master plan.  This movie has some ferocious fights which are actually performed by Carano herself as she's also been a professional mixed martial arts fighter.  Back in Dublin, Mallory figures out what's going on and decides to play them at their own game.

She comes back to the US and draws them out one by one once she gains her allies, Coblenz (Michael Douglas) a government agent working with Kenneth who suspects something shady is afoot and her supportive father (Bill Paxton) and works to complete her revenge and clear her name.  The film is entertaining and fast with quick twists and turns.  You won't be bored.  Actually, my main quibble with it was it too short, I would liked to some more of Mallory kicking butt and enacting revenge.  But I think Soderbergh was wise to cut it off where he did and leave us wanting more.

Haywire is all Carano, a fine showcase to her fighting abilities and is aided by an impressive cast of McGregor, Douglas, Fassbender, Antonio Banderas and they all put in a strong supporting performances.   If you're tuning in to the men of Haywire, I'm sorry to tell you that they all have limited screen time.  But the film works because it's Mallory's story and she doesn't panic and go frantic when framed and accused.  But instead devises a systematic plan of action to figure out who is behind this.  Fun stuff!  While Carano is ace in the fighting department, she does say all her lines in the same tone.  But ignore that and enjoy the action.