Hollywood studios often get ideas at the same time. How else do you explain the persisting problem of making films on the same subject by dueling film studios? Going all the way back to William Wyler's Jezebel (1938), a Bette Davis vehicle set in the American Civil War, was made to compete with Gone With the Wind (1939).  Since then, we've had films like Robin Hood and Robin Hood: Prince of Thieves both come out in 1991 and more recently, Tarsem Singh's Mirror Mirror and Universal's Snow White and the Huntsman released in 2012.

This time, Hollywood has Rudyard Kipling on the brain. Out today is Disney's first trailer for Jon Favreau's live action meet motion capture fantasy The Jungle Book coming out next April. Starring newcomer Neel Sethi as Mowgli and the voice talents of Bill Murray, Idris Elba, Scarlett Johansson, Ben Kingsley, Christopher Walken and Lupita Nyong'o, the film is more Kipling than the 1967 animated film. But wait a minute, didn't Disney already make a live-action The Jungle Book way back in 1994 starring Jason Scott Lee? Why yes, they did. But they're Disney, who's going to stop them from making another?

Meanwhile, motion capture transformation king Andy Serkis is directing his first film, Jungle Book: Origins with young Rohan Chand as Mowgli. Benedict Cumberbatch, Christian Bale, Cate Blanchett, Naomie Harris, Tom Hollander and Serkis himself will be providing the voices. Unlike Disney's The Jungle Book which only has Sethi as the lone human in the film, Matthew Rhys and Freida Pinto will also be acting in the film. There's a long wait to see Jungle Book: Origins; the film is scheduled to release on October 6, 2017. 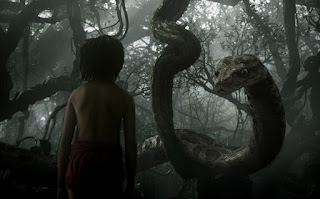 This new trailer gives us the first look of young Mowgli in action in the jungle going up against Shere Khan, Bagheera, Kaa and more. In fact, Scarlett Johansson as Kaa narrates the trailer, inviting us along with Mowgli to come over to the dark side. Favreau's film has a Lion King feel with a sprinkling of the animated classic (did you catch those few bars of 'Bare Necessity'?). The Jungle Book promises to be a grand scale adventure that will surely please fans of the original novel. One thing's for sure: The Jungle Book is going to look amazing in 3D.
Posted by Sonal at 11:16 PM