Entertainment Weekly has released the first look of Lily Collins as Snow White in the first of the dueling Snow White movies, The Brothers Grimm: Snow White.  Directed by Tarsem Singh, the film also stars Armie Hammer as the Prince, Sean Bean as the King and Julia Roberts as the Evil Queen. 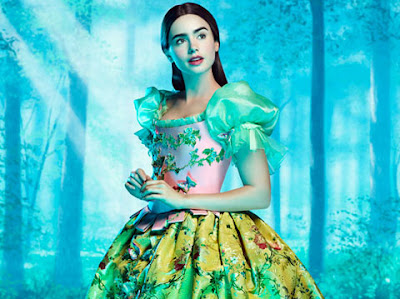 Lily Collins certainly looks the part but I'm not sure what's going on with the costume there.  She looks like she could be atop a cake!  Let's hope for a costume change in the film.