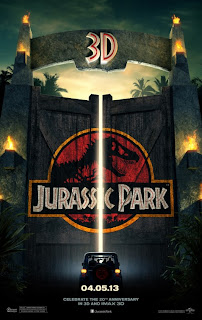 It has been 20 years since the first Jurassic Park film released in theaters to become a gigantic summer blockbuster and launched a dino-franchise that still holds steam today (Jurassic Park 4 is already in the works).  This week, the original Jurassic Park is back in theaters in a 3D avatar and while the 3D may seem unnecessary (I think that has to do more with the theater I watched it in. It will look awesome in IMAX), one can’t deny that even after all these years, the film still has the power to awe you.

We’ve all caught the film plenty of times either on DVD or TV but seeing on the big screen again is a different kind of pleasure altogether.  From the first glimpse of Isla Nublar where the theme park is located, to the sight of the first dinosaur, to everyone’s reactions to the dinosaurs, everyone is just amazed that dinosaurs can be brought back to life. Paleontologist Dr. Alan Grant (Sam Neill), a paleobotanist Dr. Ellie Sattler and mathematician Ian Malcolm (Jeff Goldblum who pretty much looks the same even today) have been brought in to assess the stability and viability of the park before the park opens to the public.  The park’s creator and financier John Hammond also invites along his two young grandchildren Lex and Time (Ariana Richards and Joseph Mazzello) to round out the weekend excursion but of course as we all know, things aren’t going to go as planned in Jurassic Park.

Based on the best-selling novel by Michael Crichton, the book and film both explain the re-existence of dinosaurs back on planet as just a matter of time.  All it takes it some blood derived from mosquitoes embalmed perfectly all these years in amber.  Back then, I totally bought the explanation. But the scene where we first see the dinosaurs is still awe-inspiring and a personal favorite.

While watching the film, I had forgotten so many scenes in the film.  The eerie entrance (and first glimpse) of the T. Rex, Dennis Nedry aka Newman getting his comeuppance from a truly scary Dilophosaurus, that amazing shot of T Rex bellowing in the Visitor’s center as the sign ‘When Dinosaurs Ruled the Earth’ flutters down to Dr. Sattler getting the fright of her life in the main control room.  They still have the same impact and the film is classic Spielberg.

I love, love, love the T. Rex chase scene where the dinosaur advancing on the car as glimpsed in the side mirror that says ‘Objects in mirror are closer than they appear’ has gone down in film history.  That and the water ripple in the glass in the career.  Simply iconic!  And earlier in the year, Spielberg also released Schindler’s List which one him his first Best Director Oscar.  To have two films as diverse as Jurassic Park and Schindler’s List is truly amazing and mind-blowing.

The main reason why the T. Rex and velociraptors still look menacing in 2013, the mastery of Stan Winston’s realistic models that hold up even today mixed in with just the right amount of CGI to even things out.  The film was a game changer for 1993 and as Spielberg himself admitted, “It changed special effects forever and for better or for worse, it really did introduce the digital era.”

Rightfully so, the film won 3 Academy Awards for Best Visual Effect, Best Sound Mixing and Best Sound Editing.  The sound of the T. Rex roaring at the kids in the jeep and the creepy sound of the velociraptors preying on Lex and Tim in the kitchen still sends a chill down my spine and more so watching it again in the theater in proper surround sound.

And last but not least, let’s talk about the iconic score for the film by the always underrated John Williams.  The man is a living legend and when he gets together with Spielberg, he produces magical stuff. The quiet reflectiveness of the theme of Jurassic Park, the wonderment of seeing the dinosaurs for the first time to the final attempts from everyone to escape the park that heightens the suspense.  This music simply stands the test of time.

It was absolutely wonderful walking down memory lane with Jurassic Park all over again.  Watch it again and step into the world of dinosaurs one more time.