Yesterday, a little gift was released by Warner Bros., a first tease into the world of Batman and the third film in the Batman universe directed by Christopher Nolan.  Here's a look at the teaser poster for The Dark Knight Rises. 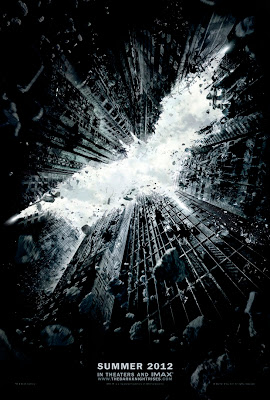 Seeing as this is a Christopher Nolan film, this is giving me echoes of Inception here with the city landscape giving hints of the film's mood.  I like it, I like a lot.  I'm also hearing a teaser trailer is due to release any day soon.  Will keep you updated.
Posted by Sonal at 11:48 PM

Email ThisBlogThis!Share to TwitterShare to FacebookShare to Pinterest
Labels: The Dark Knight Rises