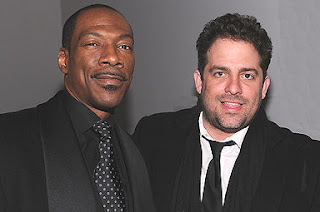 Brett Ratner has stepped down as show producer of the Oscars after he has been reported making several inappropriate and homophobic comments in the media while promoting his movie Tower Heist which also features former Oscar host Eddie Murphy.  Former? Yes, Eddie Murphy also stepped down as host with this statement:


“First and foremost I want to say that I completely understand and support each party’s decision with regard to a change of producers for this year’s Academy Awards ceremony. I was truly looking forward to being a part of the show that our production team and writers were just starting to develop, but I’m sure that the new production team and host will do an equally great job.”

Brett Ratner had picked Murphy as host for his vision of the Oscar telecast and it was also kind of a promotion for their movie, Tower Heist, which is in theaters now.  It's not doing that well.  Thankfully, the show is still 3 months away and the Academy has picked uber-producer Brian Grazer to produce it with Don Mischner.  Question: Who will host now?  Lots of names being thrown out but I like that a lot of female hosts might be up for consideration.  The ladies of comedy from Tina Fey, Kirsten Wiig and Melissa McCarthy from Bridesmaids are looking like possibilities.  My all-time favorite host is Billy Crystal and I'd be over the moon if he were to come back.  My fondest Oscar memories (and the funniest) are when he hosted.  The next few days, it'll be all speculation as to who hosts.

What did the Academy learn from all this; it was supposed to be an edgy move, hiring Brett Ratner.  But look what happened last year with the younger hosts choice of Anne Hathaway and James Franco.  Widely panned.  Thankfully, this is over with much before the show and could be forgotten once the actual day comes.  I do feel, however, Eddie Murphy would have been hilarious on it.  Don't forget he started his career in stand-up and was once a Saturday Night Live cast member.  A missed opportunity for sure!
Posted by Sonal at 6:42 AM