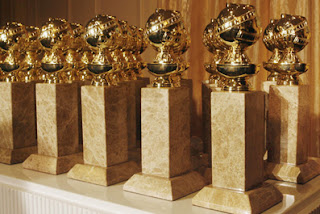 24 hours after the SAG awards were just announced comes the naming of the nominees for the Golden Globes.  Here we go again!

Best Drama
The Descendants
The Help
Hugo
The Ides of March
Moneyball
War Horse
My take: 6 nominees, yet no Harry Potter again.  I still will hold out hope for the BAFTAs and perhaps some Oscar acknowledgement too.  However, all these movies are top contenders here.
Best Comedy/Musical
50/50
The Artist
Bridesmaids
Midnight in Paris
My Week with Marilyn
My take: Midnight in Paris is gaining some traction and showing up on critics lists here and there and thank god for Bridesmaids and 50/50 gaining recognition.  It's nice to have some actual comedies in this category.
Best Animated Film
Rango
The Adventures of Timtin
Puss in Boots
Cars 2
Arthur Christmas
My take: This year, I don't think Pixar is going to take the big prize.  Rango was the best animated film this year.  I'm not sure The Adventures of Tintin belongs here as much of the film contains motion-captured performances.  Maybe they weren't sure where to put it.
Best Actor in a Drama
George Clooney, The Descendants
Brad Pitt, Moneyball
Ryan Gosling, The Ides of March
Michael Fassbender, Shame
Leonardo DiCaprio, J. Edgar
My take: I have no complaints here.  Every single nominee is deserving.
Best Actor in a Comedy or Musical
Jean Dujardin, The Artist
Brendan Gleeson, The Guard
Joseph Gordon-Levitt, 50/50
Ryan Gosling, Crazy, Stupid, Love
Owen Wilson, Midnight in Paris
My take: I don't think I have heard of The Guard, I'll have to look it up.  Nice to see Owen Wilson's name on the list.  Ryan Gosling is a double nominee here in both comedy/musical and drama categories and he still had another great movie in Drive out too.  Great year for him.
Best Supporting Actor
Kenneth Branagh, My Week With Marilyn
Albert Brooks, Drive
Jonah Hill, Moneyball
Christopher Plummer, Beginners
Viggo Mortensen, A Dangerous Method
My take: The sole nominee for Drive is with Albert Brooks.  Viggo Mortensen is the dark horse here, could sneak in and win it.
Best Actress in a Drama
Glenn Close, Albert Nobbs
Viola Davis, The Help
Rooney Mara, The Girl With the Dragon Tattoo
Meryl Streep, The Iron Lady
Tilda Swinton, We Need to Talk About Kevin
My take: It's between Viola and Meryl this year.  Everyone else should just be happy to be there.
Best Actress in a Musical or Comedy
Jodie Foster, Carnage
Charlize Theron, Young Adult
Kristen Wiig, Bridesmaids
Michelle Williams, My Week with Marilyn
Kate Winslet, Carnage
My take: Carnage came out of nowhere, it wasn't showing up on many critics' lists.  The real competition is between Charlize and Kirsten.
Best Director
Woody Allen, Midnight in Paris
George Clooney, The Ides of March
Michel Hazanavicius, The Artist
Alexander Payne, The Descendants
Martin Scorsese, Hugo

My take: All well deserved nominees but I think it boils to Martin Scorsese and Michel Hazanavicius for the big prize.

Best Screenplay for a Motion Picture
Woody Allen, Midnight in Paris
Michel Hazanavicius, The Artist
Alexander Payne, Nat Faxon, Jim Rash, Kaui Hart Hemmings, The Descendants
Steve Zallian, Aaron Sorkin, Stan Chervin, Michael Lewis, Moneyball
George Clooney, Grant Heslov, Beau Willimon, The Ides of March
My take: All great screenplays here and I truly think Woody Allen has a great shot at this.  Or else it could be between The Descendants or The Ides of March.
Best Original Score in a Motion Picture
Ludovic Bource, The Artist
Abel Korzeniowski, W.E.
Trent Reznor and Atticus Ross, The Girl With the Dragon Tattoo
Howard Shore, Hugo
John Williams, War Horse
My take: W.E. came out nowhere, didn't it? However, I think Trent Reznor and Atticus Ross are due to repeat their success from last year's The Social Network.
Best Original Song in a Motion Picture
“Hello Hello,” Gnomeo & Juliet
“The Keeper,” Machine Gun Preacher
“Lay Your Head Down,” Albert Nobbs
“The Living Proof,” The Help
“Masterpiece,” W.E.
My take: No clue about this category, I was only previously aware of Mary J. Blige's 'The Living Proof' from The Help.