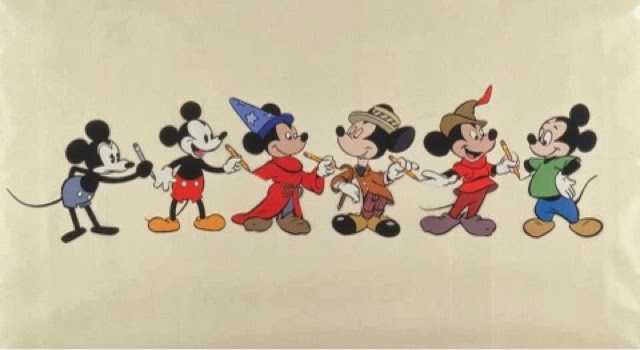 85 years ago, on November 18th, 1928, the world was introduced to a cartoon character named Mickey in the short Steamboat Willie. Since then, the little mouse has taken many forms, as evidenced in the photo above. But what has remained constant is our affection and fondness for Mickey. He is still the unofficial symbol for all things Disney and those mouse ears mean many different things to people around the world. No trip to the several Disneyland parks located worldwide is ever complete without meeting a certain mouse in his house. That was always my agenda as well.

One of the few cartoon characters to have a star on the Hollywood Walk of Fame (and deservedly so), the iconic mouse has appeared in several shorts, features, TV shows, games, comics and even had a variety show named after him called The Mickey Mouse Club that lasted through several generations. Famous Mouseketeers include Annette Funicello, Justin Timberlake, Christina Aguilera, Britney Spears and Ryan Gosling.

And this November, Mickey Mouse is back in theaters alongside Frozen with his newest and oldest short Get a Horse! beside his friends Minnie Mouse, Horace Horsecollar and Clarabelle Cow. Happy 85th, Mickey! Thanks for being our friend all these years.