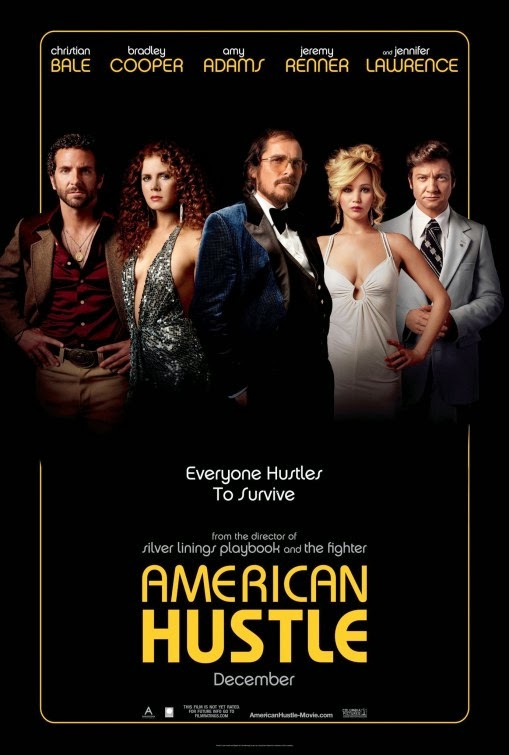 All last year I saw the making of/behind the scenes images of Bradley Cooper and Jennifer Lawrence and Amy Adams and their wild, wild hair. I cannot put enough emphasis on that wild hair which defines David O. Russell's American Hustle whose cast is the main reason to go see this film.

Christian Bale is Irving Rosenfeld, a balding middle-aged man handling a wife, a mistress and an illegal business selling loans. He thinks he's managing his life just fine until FBI Agent Richie DiMaso (Bradley Cooper) enters their world and turns the tables on the tables on them. Irving and his mistress Sydney (Amy Adams) who have built this business together have no choice but to entertain this ambitious agent who is looking for 'the' case that will propel his career into the big league.

The two of them sink deeper and deeper into the sting operation DiMaso has planned involving the mayor of Camden, New Jersey Carmine Polito (Jeremy Renner) and other members of Congress.  And then to confuse matters more, there's a also a plot involving an Arab sheikh (played by Michael Pena, who is another FBI agent impersonating a sheikh), some mobsters and an overly jealous and possessive wife (Jennifer Lawrence).

How does this all make sense? It doesn't at plenty of times in the movie but the actors make it all worthwhile as every moment onscreen, you see Bale, Adams, Cooper, Lawrence, Renner and especially Louis C.K. all committing one hundred percent to these zany characters that inhabit this universe.  Inspired by the events of the 1970s and 80s in the actual ABSCAM case, it gives these actors some great material to work with.  Case in point, Christian Bale, Amy Adams, Bradley Cooper and Jennifer Lawrence are all nominated for their work at next month's Oscars.

While the writing didn't add up for me at several places during the film, what works is Russell's deft direction of the actors, bringing out the real emotions and motives behind their actions especially in the case of Adams and Lawrence.  I also loved the film's soundtrack, its grooving disco tunes and great use of songs at key moments.  My expectations were definitely way higher before I went in for the film.  I guess it had to do with the great quality of films that got released in 2013.  But if you are a fan of either of these actors, you won't be disappointed.