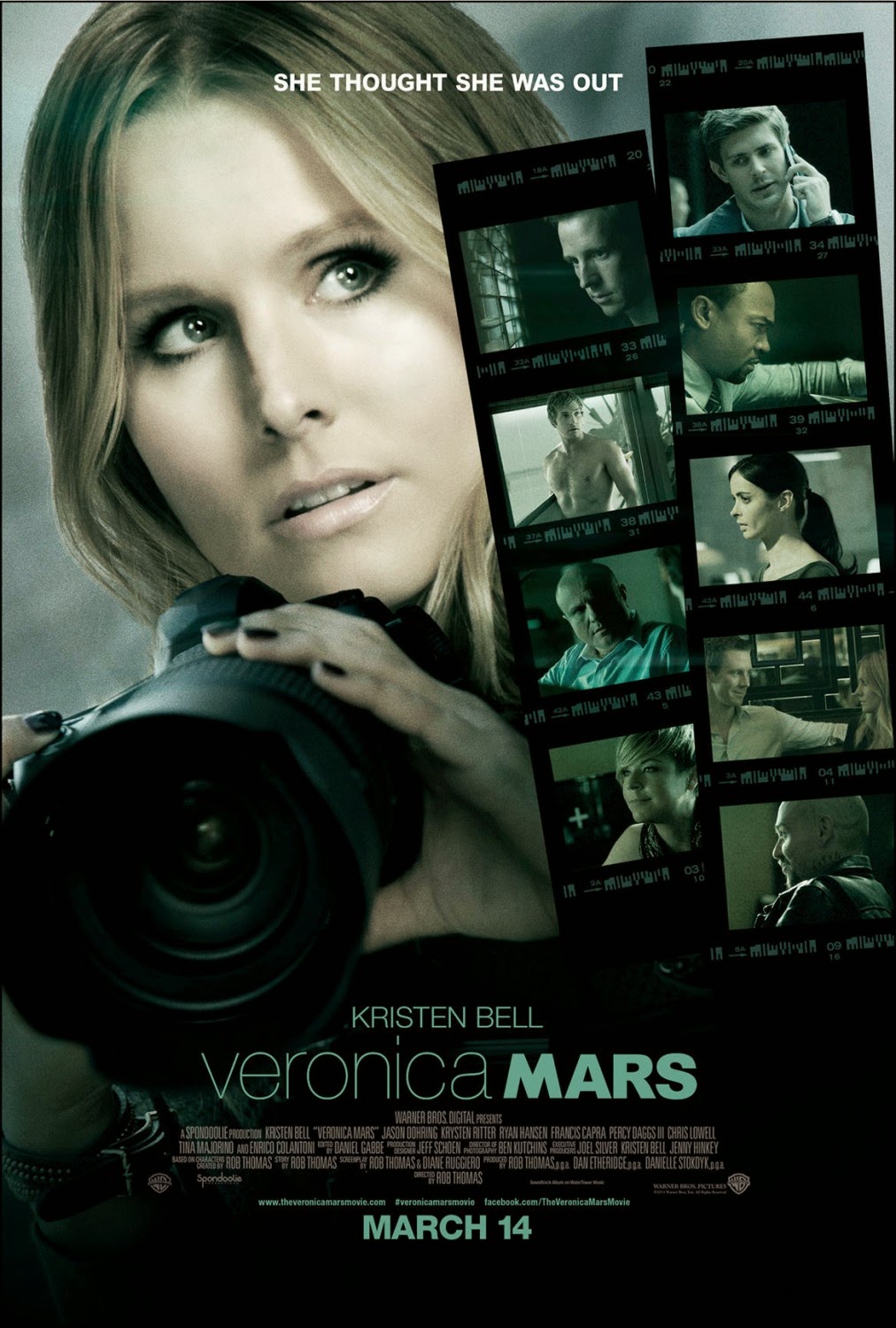 “A long time ago, we used to be friends… “ Stop me if this theme song is familiar to you in any way, because a long time ago, you used to be a marshmallow. Yes, Marshmallows, it’s our time in the spotlight as Veronica Mars, the feature film, finally landed on March 14, 2014, a year after its historic and game-changing Kickstarter campaign. The most popular girl-detective (sorry, Nancy Drew!) is back with a new saga for the big screen that not only changes her life but has potentially life-changing decisions for several other characters in Neptune verse.

For the uninitiated, Veronica Mars was the titular lead character on a not-so-successful series of the same name on The CW. Set in the fictional town of Neptune, California, Veronica (played by the winning Kirsten Bell) is the daughter of the disgraced sheriff Keith Mars (Enrico Conlatoni) who finds herself ostracized from her school, her community and her best friend’s family during a murder investigation of said best friend Lilly Kane (Amanda Seyfried). Of course, this unique genre of high school noir became instantly likable with its snarky dialogue (a la Joss Whedon), great storytelling across seasons and some amazing guest stars (two-time Academy Award nominee Jessica Chastain, Academy Award winner Melissa Leo and Emmy winner Aaron Paul all had small parts on the show). The series regulars, were just as talented, as most of them have gone on to successful film and TV careers. Yet I imagine they were always associated with their parts on Veronica Mars, the TV show which was cruelly canceled due to low numbers in 2007.

But here we are seven years later, with a triumphant return on silver screen as we meet Veronica and her Scooby gang reunited in Neptune as a murder investigation and a high school reunion loom large among other unresolved issues. To recap, Veronica has moved on since college and is about to join a prestigious law firm. She has a supportive boyfriend Piz (Chris Lowell) who, if you can recall, she also dated in college. But that's where the California ties end for Veronica. No more investigations, no more stakeouts, no more dangers. So she thinks.

Veronica gets pulled back in the game as her other ex-boyfriend, a certain Logan Echolls (Jason Dohring) is accused of murdering his musician girlfriend, Bonnie DeVille aka Carrie Bishop, a girl they both went to high school with. Once Veronica is back in Neptune, no matter how she tries, she falls into the rhythms of the past much easier than she or anyone else expected. There are fake identities, suspects to be interrogated and sheriffs to piss off. In short, it's the good old days.

Old friends and foes, such as Wallace (Percy Daggs III), Mac (Tina Majorino), Eli (Francis Capra) and Madison are back as are fan favourite characters, Leo D'Amato (Max Greenfield) and Vinnie Van Lowe (Ken Marino) delighting us with their brief appearances. This is the reason why the film exists in the first place, because the fans weren't done with Veronica and her world just as yet. So the reunions are brief as multiple plot lines are introduced, with several character's futures at stake. The solving of the murder mystery is pure Veronica at her best, recruiting her friends and stepping up her game to find out who wants to harm Logan.

Team Logan fans will be delighted with young Echolls' maturation since college, he's now in the Navy and trying to leave his wild days behind him. I said, trying... there is a roaring fistfight at the reunion that echoes Season 1 Logan nicely. But I must say, I wavered briefly and over onto the Team Piz borderline for a bit. But then, all it took was a Logan smoulder by his car and I was back. The rest of the Neptune gang has little time onscreen on a 107 minute film and the celeb cameos (including James Franco and Dax Shepard) will give you a quick chuckle, but the film ends, promisingly and tantalisingly, with the hope of future installments in Veronica-verse.

Veronica Mars is meant strictly for fans for original series who love the throwaway references and hints to the show's previous seasons but I hope it also tunes fans in to watching the series for the first time. And I strongly hope this isn't the last we've seen of Veronica and that it doesn't take another seven years or a college reunion to see her again.