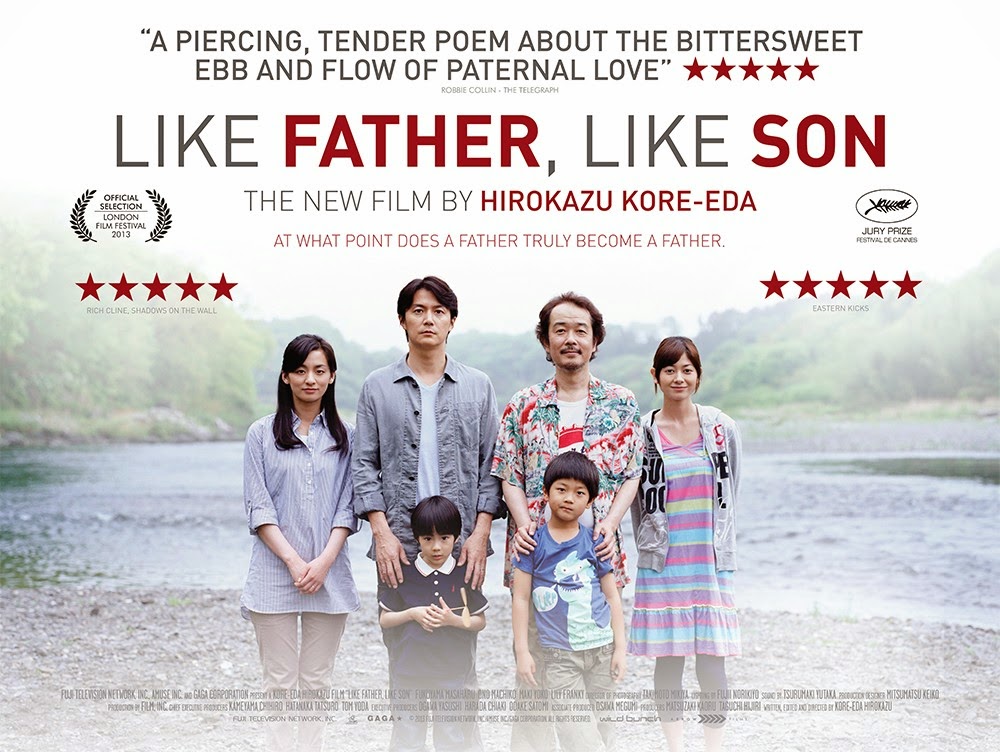 The above poster features the tagline 'At what point does a father truly become a father?'.  Hirokazu Kore-eda's Like Father, Like Son (Soshite chichi ni naru) explores themes of family and fatherhood in this extremely moving film that just might have you reaching for the whole box of the tissues and not just a single tissue.

As much as I love French comedies for their absurdities and boisterousness, I love Japanese dramas that quietly bring home the point with beautiful storytelling and emotions.  I expected no less with Kore-eda's latest.  The story deals with two vastly different families - the Nonomiyas and the Saikis - who have two young boys just about to start school.  When the Saikis discover through a blood test, that their son and their DNA doesn't match, it all leads to a possible accidental swap at the hospital the day he was born.  Suddenly, the Nonomiya's orderly world is threatened as well and their fears come true.  Their son is not their biological son.

Both families are devastated to learn this and at the first meeting negotiated by the hospital, awkwardness and anger ensues. Though not at each other but at the strange turn of circumstances.  The hospital would like them to swap children as soon as possible as the boys are still young and might not be affected much once they get older.  However, the parents are much more reluctant.  The situation is unique and the wounds are still raw.  They decide to meet frequently to get to know each other more.

Thorough these meetings, the differences between the two families are never more evident.  The Nonomiyas are the wealthier of the two and live in a modern high-rise apartment building in the city while the Saikis live in a small cramped house two hours from the city and behind their hardware store.  The contrast between the two little boys is more so.  Keita Nonomiya is a thoughtful, quiet only child and Ryusei Saiki is the playful eldest of three. They are the reflections of two opposite styles of parenting.

Ryota Nonomiya (Fukuyama Masaharu) is at times cold, demanding workaholic who believes that one should be independent.  Therefore little Keita learns the piano even though he's only fair at it, attends a top-end school and has impeccable manners.  Ryusei is more outgoing, chews through his straw while sipping a drink and focuses all his attention on his handheld video game.  In short, the boys have much to learn from each other.

But they never do get that much time to as their parents decide on swapping them on weekends as they ease into swapping them for good eventually.  Keita and Ryusei are bewildered at this sudden change and look upon it initially as a mini-vacation that suddenly turns into a permanent situation.  They have now to call these strangers 'father' and 'mother' and get used to a whole new way of life.

As do their parents, having prepared for their future in one way and have to rethink how to approach their own sons.  Writer-director Kore-eda chooses to hones in on the two fathers, Yukari and especially Ryota.  Ryota is a self-made architect while Yudai (Lily Franky) is more fun-loving and has a more hands on approach to raising his three children.  He fixes toys, takes them to fly kites and is an equal hand to raising his kids with his wife Yukari (Maki Yoko).  Meanwhile, Midori Nonomiya (Ono Machiko) might as well be raising Keita alone for all the time he spends at work.

Like Father, Like Son won the Jury Prize at the 2013 Cannes Film Festival.  The jury featured directors Steven Spielberg and Ang Lee, both of whom have explored the often difficult relationship between fathers and sons.  In fact, the Spielberg-owned DreamWorks has officially commissioned a Hollywood remake of the film.  But I urge you to first watch the original because I am sure that much will be lost in the cultural transfer.

Kore-eda's editing has fewer cuts and gives the movie a slow pace that most Western audiences won't be used to.  But I enjoyed the camera lingering on its subjects and showing the action from the viewpoints of the little boys as well.  The children in this feature, especially little Keita with his expressive, emotional eyes, are the big reason to tune in to this film.  And unlike Hollywood, here the dramatic outbursts are kept to a bare minimum.  It takes many things to become a father, one of which is unconditional love, as the characters find out themselves in their own sweet time.  That's a good thing, a really good thing. Like Father, Like Son joins my list of favourite Japanese films alongside Tokyo Story, Rashomon, Departures and more.  Do watch it if you can.