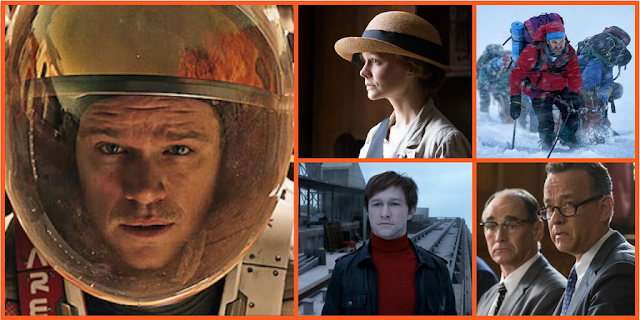 It’s June, you know what that means. It's time to roll out trailers for films releasing in the latter half of the year that could potentially have an awards presence. Hence, you’ll find Hollywood’s A-list Meryl Streep, Tom Hanks and Matt Damon all featured in the trailers for Suffragette, Bridge of Spies and The Martian respectively. The films below all come with good pedigree with award-winning and nominated directors, screenwriters, and actors showcasing their latest work.

The early struggle of the British women’s suffrage moment and their fight for equality is the focus of director Sarah Gavron (Brick Lane) and screenwriter Abi Morgan (The Hour). The mostly British cast, minus Meryl Streep, of Carey Mulligan, Helena Bonham Carter, Ben Whishaw and Romola Garai show how dangerous and brutal a fight the feminist movement had to have an equal voice. Streep, who plays British activist Emmeline Pankhurst, can be counted as an honorary Brit, after all, she did win her third Oscar for portraying the late Prime Minister Margaret Thatcher in The Iron Lady. Come awards season, Suffragette could land potential nominations for best film and lead and supporting nominations for its actresses. The film releases in theatres on October 23, 2015.


James Marsh’s 2008 documentary Man on Wire on Phillippe Petit’s daring walk between the World Trade Towers already won the Best Documentary Oscar. Now, director Robert Zemeckis (Forrest Gump, Back to the Future) is retelling Petit’s story from his book, To Reach the Clouds. With Joseph Gordon-Levitt as Petit and Oscar winner Ben Kingsley, The Walk recreates his famous 1974 walk in breathtaking 3D and will be showcased on the large screen IMAX format. Best of all, the film gives Gordon-Levitt the chance to show off his French accent. The self-confessed Francophile has been a fluent French speaker for years. Take that, Bradley Cooper! The Walk, with Zemeckis’s previous Oscar and Golden Globe wins, might gain best film, director and lead actor nominations for Gordon-Levitt. It releases in theatres on October 2 and will have its premiere as it opens the New York Film Festival on September 25, 2015.


Based on writer Jon Krakauer’s (Into the Wild) book Into Thin Air, Everest details the 1996 fatal climb to Mount Everest. A strong ensemble cast of Jason Clarke, Josh Brolin, John Hawkes, Robin Wright, Sam Worthington, Keira Knightley, Emily Watson and Jake Gyllenhaal take us throw the harrowing expedition which takes a turn for the worse once a severe snow storm hits. Directed by Baltasar Kormakur (2 Guns) and co-written by Simon Beaufoy (Slumdog Millionaire) and William Nicholson, Everest also features a score by Oscar-winning composer Dario Marianelli (Atonement). Lately, most true life stories get recognized for their screenplay and direction, Everest too could like be nominated for the same. I have a feeling it could also squeeze through the technical categories, especially for VFX, if all the superhero films don’t crowd it out. Everest releases in theatres on September 18, 2015.


This is collaboration number 124578 between director Steven Spielberg and actor Tom Hanks. No, not really, but the Spielberg-Hanks partnership goes way back to 1990 when they first worked together a little film called Joe Versus the Volcano. (Sidebar: This ‘little’ film is a gem, do watch it if you can.) Based on the true life story of the 1960 incident when an US spy plane was shot down in Soviet airspace, Bridge of Spies is also adapted from the book of the same name by Giles Whittell. Co-starring Mark Rylance, Amy Adams and Alan Alda, this Spielberg-directed cold war thriller could land plenty of nominations during awards season. The prolific Coen brothers, Ethan and Joel, have contributed to the screenplay and composer Thomas Newman could earn his 13th Oscar nomination for the score. Could the 13th time be the charm? Bridge of Spies releases in theaters on October 16, 2015.

We just saw Matt Damon play a stranded astronaut in Christopher Nolan’s Interstellar. He’s back to repeat the experience, this time on the red planet, Mars, closer to home. Directed by Ridley Scott (Gladiator) and featuring a screenplay by Drew Godard (World War Z), The Martian is based on the popular novel by Andy Weir. The film costars Jessica Chastain, Kristen Wiig, Jeff Daniels, Kate Mara and Chiwetel Ejiofor in this intense story of a man surviving and trying to find his way back to Earth. Damon could find himself once again competing for lead actor and this film, like Everest, will feature prominently in the technical categories like sound and VFX as well. The Martian releases in theaters on October 2, 2015.

These are just five of the many award hopefuls releasing in the second half of the year. What film are you most looking forward to?
Posted by Sonal at 10:51 PM