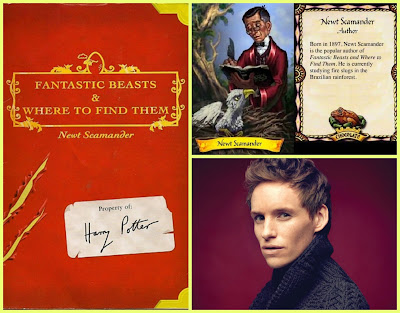 Newly minted Oscar winner Eddie Redmayne has a new role - that of intrepid adventurer Newt Scamander in new Fantastic Beasts and Where to Find Them trilogy being penned by JK Rowling.  Redmayne's name had been whispered around as the lead for months now; the news was just made official yesterday.

The prequel will find Newt in 1930s New York on a journey that will probably be catalogued in the textbook that Harry Potter, Ron Weasley and Hermione Granger end up reading at Hogwarts. Additional details about the story or more characters isn't official as yet, but the film promises to be about characters and creatures set in the wizarding world we have to know and love.

The original Harry Potter team is back for this trilogy as well. Director David Yates who closed out the series with the last four films returns in the director's chair and David Heyman will produce these prequel films once again. Rowling takes on the role of screenwriter for the first time. Fans are really excited about this, knowing the level of detail she usually includes in her stories.

Fantastic Beasts and Where to Find Them releases next year on November 16, 2016.
Posted by Sonal at 9:25 AM