They're here, the 2016 Oscar Nominations are announced! 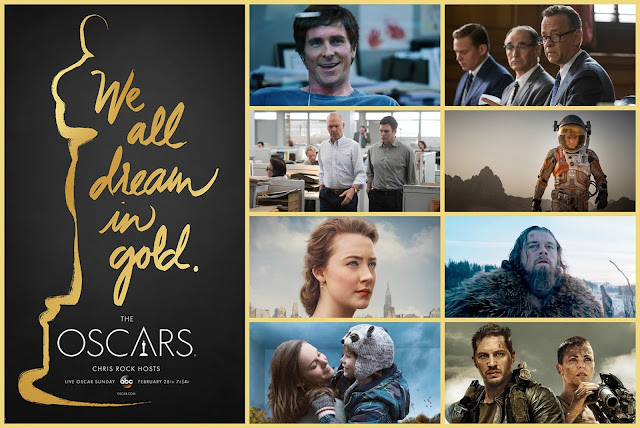 Second to Oscar day, the most exciting time of the year is when the nominations are announced. It's my anticipated days of the new year. This new tradition of dividing the nominations into two segments is growing on me. The first sections (mostly the tech noms) are announced by two directors, today it was Ang Lee and Guillermo del Toro. The second section (the real deal, y'all) was announced by a scruffy John Kransinki (Hi, Jim!) and Academy President Cheryl Isaacs Boone. As soon as the nominations were announced, wave of delight and outrage started online. So without further adieu, here are the complete nominations for 2016 below

My take: Just like last year, the best picture nominations totals eight.The Revenant leads the pack with 12. I'm already bracing myself for the inevitable, the unpredictability of this year. There's no clear frontrunner and I truly believe it's anyone's year. It all matters on momentum and just how that particular Oscar voter was feeling that day. That said, I'm delighted to see Room, The Big Short and The Revenant land the big nominations. It's good to see The Martian and Mad Max: Fury Road, two films that did extremely well at the box office make it to the top eight. This exclusive club is open to the blockbusters occasionally. I haven't gotten the chance to see Brooklyn or Spotlight yet. Time to rectify that soon.

My take: The big story in this category remains that will the Academy ever see DiCaprio worthy of winning the gold statue or will Redmayne make like Tom Hanks and score himself a second consecutive Oscar. I say, don't count out the formidable Byran Cranston, whom I'm sure could teach these young 'uns a lesson.


My take: Two first-timers, a previous winner and a three-time nominee, they all got nothing on the sentimental favorite Stallone who's back playing Rocky Balboa. The first real lock of 2016.

PERFORMANCE BY AN ACTRESS IN A LEADING ROLE


My take: I'm always chiding the Academy for not recognizing young talent and here, three young actresses have virtually taken over the category. Cate Blanchett is looking to get into the same league  as Meryl Streep with her third win, if only the Academy can resist the charms of Jennifer Lawrence (nominated for all three of her films with David O. Russell). But the real winner is Charlotte Rampling, I'm so pleased her performance was honored. It'd be too much to ask that she would win.

My take: Kate Winslet might have just won the Golden Globe for Best Supporting Actress but for the big race, I do think it's between Rooney Mara and Alicia Vikander, even though theirs are not supporting performances. The lead actress category was so crowded this year that it spilled over to the supporting. A sneaky way, but effective nonetheless.

Anomalisa: Don Hall, Chris Williams and Roy Conli
Boy and the World: Alê Abreu
Inside Out:  Pete Docter and Jonas Rivera
Shaun the Sheep Movie: Tomm Moore and Paul Young
When Marnie was There: Hiromasa Yonebayashi and Yoshiaki Nishimura

My take: Last year, this category scored a big upset when Big Hero 6 won. Will this year be the same? Pixar's Inside Out was so critically acclaimed this year that I thought it might sneak into Best Picture. It definitely looks to be the frontrunner here but I wouldn't count out Anomalisa or the films from Aardman and Studio Ghibli - Shaun the Sheep Movie and When Marnie was There.

My take: Keeping my fingers crossed that this is year Roger Deakins finally, finally wins. But the rest of the films in this category were gorgeously shot. Still hoping for a Deakins win.

My take: The amazing Sandy Powell made Cate Blanchett look absolutely stunning onscreen in both Carol and Cinderella but the characters in Mad Max were so damn unique (and numbering in hundreds).

My take: I'm relieved that this year I have a head start and have seen two of the nominated documentaries, Amy and Cartel Land. Oppenheimer's The Look of Silence has had the most buzz around it. I personally really enjoyed Amy.

My take: It's homework time on these shorts, though I do recognize a previous nominee, Sharmeen Obaid-Chinoy.

My take: Ah, finally a technical category where the number of women matches up to the men.Very, very pleased to see Sixel and JJ Abrams's longtime editors Brandon and Markey being honored here. The icing on the cake would be if they won.

My take: Aaaand just like last year, I haven't seen a single foreign film from the category. Shameful!

ACHIEVEMENT IN MAKEUP AND HAIRSTYLING

My take: The 100-Year-Old Man Who Climbed out the Window and Disappeared (of which i know nothing) could make history as the longest title to win an Oscar. But the real question is which Tom Hardy film is winning the makeup Oscar?

My take: Musical maestros Morricone and Williams are turning back the clock with their nominations. Williams is already the most nominated music director ever, but I have a feeling this category can bring a shocker come Oscar night.

My take: I'm dismayed with the selection this year. What happened Academy? Also, Fifty Shades of Grey is an Oscar nominee. smh

My take: From Mars to Amsterdam to colonial America, these film's sets had it all.

My take: Yay for Sanjay's Super Team! For the rest of the nominees, time to start reading up on them.

My take: See above.

My take: The lone female visual effects supervisor in the category belongs to Ex Machina. Rock on sister!

My take: One of the toughest categories for me. Hard to pick at this stage but delighted to see The Martian and Room here.
ORIGINAL SCREENPLAY

My take: #OscarSoWhite they only saw fit to nominate Straight Outta Compton in the Screenplay category. What happened to Best Picture and Score? smh again