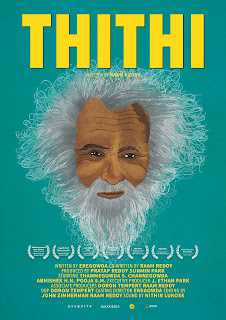 Last year at the Mumbai Film Festival, I saw amazing films both from international and Indian cinema. One of those Indian films happened to be Raam Reddy's Thithi, a stunningly complex and layered film on death, loss and familial relationships. Showing the travails of ordinary village life tied to the rituals of life and death, Thithi is a powerful film, made richer with the wonderful characters in it.

The most extraordinary thing about Thithi is that it is the first feature by Reddy. He scripted the film along with Eregowda, who based the film and its characters on the experiences from his own village. The film utilizes first-time actors, whose natural and effortless performances are the key to its likability.

Thithi opens with the death of the 101-year-old 'Century' Gowda, a colourful character if ever there was one. His death impacts three generations down the line; Century's son Gaddappa, Gaddappa's son Thamanna and Thamanna's son, Abhi. Each man has different reactions to the death of the patriarch in the family.

Gaddappa lives off the land and has long rid himself of attachments, human and objects. Thamanna is too concerned with his public image and taking forward the family name, while Abhi is a happy-go-lucky but useless young man, chasing after a shepherd girl, whose nomadic family has camped near their village.


It falls upon Thamanna organizes the 'thithi' for his grandfather, although he is more than happy to take up the mantle of head of family. Thamanna is also after the family land which he believes belongs to him. He forges fake documents to obtain it as his father Gaddappa maintains his Zen-like approach to the unfurling events around him which all come to a head at the all-important funeral celebration to honor Century Gowda.

Thithi recently won the National Film Award for Best Feature in Kannada and is about to get a nationwide release on June 3rd. I laughed (a lot), I was moved and charmed by the writing and depth of this film. Big kudos to Raam Reddy and Eregowda to bringing this slice of life to the big screen. Try and catch if it you can if it's playing near you. Thithi is a treasure!