Blast from the Past: Ferris Bueller's Day Off

One way to start feeling really old, at least for me, is when news websites start putting up anniversaries of movies. Has it been that long I wonder? But yes, those movie milestones were a key part of your life growing up and it's really nostalgic to look back.

On June 11, 1986, a charming little film about a high-school student, directed by John Hughes, opened and launched a star. Ferris Bueller's Day Off is the ultimate love letter to Chicago. As the irrepressible Ferris, Matthew Broderick, stole the show as he planned the best day off from school. Many a student has tried to follow in his footsteps, including me, and failed, because let's face it, we can try to be like Ferris, but we can't really be Ferris.

I'm not going to say much about the plot (spoiler alert: it's so much fun!) but the cast, Alan Ruck, Mia Sara, Jennifer Grey, etc, pretty much nail it! Special mention of the hilarious Jeffrey Jones, as the beleaguered principal who just wants to make sure Ferris gets caught. Make sure you watch all the way until the end credits. 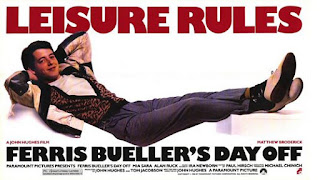