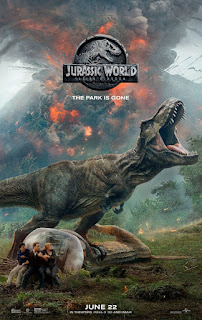 25 years after dinosaurs roamed Isla Nublar, we bid adieu to the infamous island in Jurassic World: Fallen Kingdom. The second in the Jurassic World trilogy, this film brings back the leads of the previous film, Claire Dearing (Bryce Dallas Howard) and Owen Grady (Chris Pratt) back to the island for one last adventure.

An imminent volcanic eruption on the island threatens all life on the island but nefarious forces (ie wealthy rich men) make sure that the dinosaurs don't die. Benjamin Lockwood (James Cromwell), an old associate of John Hammond who created Jurassic Park, and his advisor Eli Mills (Rafe Spalls) rope back Claire and Owen to save a few of the dinosaur species, including Blue the raptor.

Directed by Spanish director J. A. Bayona, the film examines the dinosaurs' place in this new world. Man brought them back and now must deal with the consequences of that decision. There have been other choices - with cloning and the creation of new breeds of dinosaurs. What are the ethics behind all these god-like decisions?

But there isn't much time to discuss this all on the island. Owen, Claire and a team of mercenaries try to find as many dinosaurs as they can and take them to a sanctuary. But are these mercenaries to be trusted? Of course not!

With volcano on the island due to erupt at any moment, the action moves away back to California, on Lockwood's grand estate where he lives with his isolated granddaughter Maisie (Isabella Sermon). The smart little girl finds out what the two-timing Mills is up to - setting up an auction of the dinos on the black market.

Luckily, help is on the way. Claire and Owen have made it off the island and snuck aboard the vessel with the dinosaurs making its way to Lockwood's estate. Once there, they are caught and locked up, not before they realize their responsibility in bringing back the dinosaurs and creating them into the sharp, clever entities they are today.

They somehow find Maisie who aids them around the estate and they all try to derail the ongoing auction. They manage that spectacularly. The sequence that follows when the dinosaur species manage to escape and turn on the humans is frantic, gory and thrilling to watch.

The cat and mouse chase then develops between Owen, Claire, Maisie and a particularly persistent, Indoraptor (a cross species between the Indominus rex and a raptor). The stakes are high here and you'll definitely be on the edge of your sets.

Fallen Kingdom is the second film of this second Jurassic series and the addition of director Bayona is a great choice. He brings his editor  and D.O.P. from The Impossible (2012) and The Orphanage (2007) respectively to the project and adds his own touch - connecting the series, 25 years apart.

Executive producer Steven Spielberg, who directed Jurassic Park (1993), set the template and others are carrying it forward. Bringing back the dinosaurs was an audacious move, 25 years ago, and it still remains an audacious move. Jeff Goldblum's Dr Malcolm is back in this installment to warn us again of the consequences. Like always, we never learn from history's past mistakes, do we?

Howard and Pratt are solid as usual. They have some close encounters with the cold-blooded reptiles. But it's the wide-eyed wonder and fear of Sermon's Maisie that will remain with you after the film. Maisie and that lone brachiosaurus waiting and wailing at the edge of the docks of Isla Nublar as the destruction and debris of the volcano is about to envelop her.

Jurassic Park: Fallen Kingdom is a great addition to the summer blockbuster season. Catch it if you can! My own quibble was there wasn't enough Jeff Goldblum.