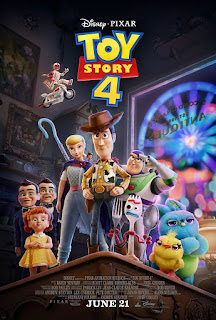 The old gang of Woody, Buzz Lightyear, Jessie, Mr and Mrs Potato Head and more are back for another installment and a whole adventure, one that has lasting repercussions on them all. This time, they reunite with a familiar face, Bo Peep, who departed the gang (unwillingly) nine years ago when the lamp she was part of, was given away to someone else.

Directed by Josh Cooley, this fourth installment is still fresh, and deeply emotional. The first film in the series, Toy Story (1995) was a game-changer in animation in so many ways. It laid the way for technological and superior innovations with computer generated animation and powerful storytelling to be melded together.

Each story of this saga has been well-received and even though we thought the chapter of this rag-tag toy gang had ended already, there was still more story to tell - Woody's. From the beginning of this series, Woody (voice of Tom Hanks) has always been the man. New toy, Buzz Lightyear (voice of Tim Allen), may have the gadgets and heroics, but the heart of the story has been about Woody and his undying loyalty.

At the beginning of Toy Story 4, Woody has shifted his devotion to a new kid, Bonnie, after his original kid, Andy, grew up and went off to college. As we left them in Toy Story 3, the gang was settling in with Bonnie's toys into one big happy family, or so we thought.

Turns out Bonnie, who is about to start kindergarten soon, has lost interest in Woody. She plays with the rest of the toys, but poor old Woody has been relegated to the cupboard. But the loyal Woody isn't giving up on Bonnie, he accompanies her to orientation day at kindergarten where the shy little girl has a hard time fitting in and making friends.

Woody lends a literal hand and guides her to some arts and crafts supplies. Bonnie ends up making a new friend - Forky - out of the mishmash. The confused utensil (now a toy) comes to life and has a hard time adjusting to the fact that Bonnie is so attached to him.

When Bonnie's family sets off a short vacation in the RV before school starts, it's up to Woody to see that Forky (voice of Tony Hale) does not escape to the trash and Bonnie doesn't lose her only friend. But it only takes a moment and he escapes, leading Woody to helm a solo mission to bring him back.

On his return, he chances upon an old antiques stores, where he finds the old lamp of Bo Peep (voice of Annie Potts) and is drawn to find his old friend again. Woody gets stuck in the creepy world of the antiques store, who is ruled by a dominating doll named Gabby Gabby. She wants something from Woody and holds Forky hostage to get it.

Meanwhile, Woody eventually does reunite with Bo Peep, the once feminine and docile character has turned into an adventurer of her own. With her three sheep, and a new friend named Giggle McDimples, she tries to help Woody save Forky and return back to Bonnie.

Try is the operative word here, as it wouldn't be a Toy Story film without everything and the kitchen sink thrown at the toys as they frantically try to restore order to their world. Along the way, the Toy Story universe introduces some new and memorable characters from Ducky and Bunny (voices of Keegan-Michael Key and Jordan Peele) to Duke Kaboom (voice of Keanu Reeves).

The true heart of Pixar films are the emotions that they bring out of unthinkable situations and subjects. Here, they've done it yet again. An aging, quite possible redundant, toy learns a lesson in moving on, and living for himself. Woody has become a beloved, iconic character for many and in movie and pop culture, so to imagine him adrift, leaves us adrift as well.

But the makers take Woody through the ringer and give him his happy ending, after all. It's a wonderful, emotional thing to see. I don't know how many of the young kids in the theater I watched it in got that, but I imagine they'll see the film with a different perspective once they are adults themselves.

If you want to spend time with some familiar faces yet again (and feel guilty about how you treated your own childhood toys), Toy Story 4 is the film to see. This might be the last time we'll see what the old gang is up to.