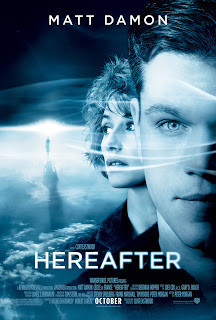 I haven't had the urge lately to write up about the movies I've been seeing as they haven't impressed me much.  The ones I watched fell way below my expectation of them, like Love & Other Drugs (which I saw only for Jake and Anne), You Will Meet a Tall Dark Stranger (Woody Allen film, yes, but I hated the weak characters), Get Low (why, hello there, Bill Murray, where have you been?), The Tourist (not as bad as I thought but it had potential to be so much better) and How Do You Know (what were you thinking, James L. Brooks? I don't know until today what the plot was).  So I felt it would take a really good movie to come along to make me write a review.

Well, Hereafter is not that movie.  But it definitely got me thinking about the subject about the movie, afterlife, and made me wish that it did explore more about that theme than just limiting to the character's experience of it.  And it is those characters that will remain with you.  Marie Lelay (Cecile de France), a 2004 tsunami survivor and journalist who is never the same after her near-death experience, Marcus (George and Frankie McLaren), a young boy grieving for the loss for his twin brother Jason and unsure how to continue on in life and George Lonegan (Matt Damon) who is a former psychic who doesn't know how to lead a normal life as his experiences with the dead take over everything.

Before I saw this movie, I knew that Hereafter was nominated this year for the Best Visual Effects Oscar but I thought it was purely for one scene.  After watching the devastating opening, the scope of the effects of the tsunami are difficult to watch especially after comparing it to the real-life images from the recent Japanese earthquake and tsunami.  The crew and movie fully deserved the nomination and the scene still echoes within me.

The main reason this film will be a must-watch with many people is because this is a Clint Eastwood film.  I find his films fascinating.  Most directors who are also actors, I find their film more telling, more revealing to me as a personal side of them than when they act because this has to be a story that they want to tell and show.  Looking at Eastwood's filmography, you would never believe this is the same man who was also Dirty Harry.  He becomes his movies, he directs, he produces, he writes, he composes the music and sometimes he also acts in them!  He has guided so many of his actors to award-winning and nominated roles.  You wish you had that same energy and enthusiasm at his age!  He truly is someone to look up to.

This film has that Eastwood stamp on it too.  And while it's a fine character study, I wish it had been longer and explored more of the subject of which it had hinted.  Peter Morgan's script needed to delve more into it.  Well, that's my two cents, my jumbled thoughts about the movie which I wanted to get out.