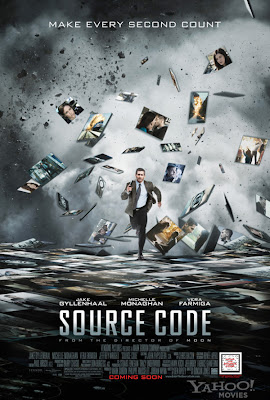 Ok, full disclosure: I'm a Jake Gyllenhaal fan.  So, this review might tend to have some Jake bias as well some sentences talking about how pretty his eyes.  Sorry, moving along.   Let's get it to it.  I had been awaiting this movie ever since I saw the trailer last year.  A sci-fi Groundhog Day! Count me in.

Source Code opens with Captain Colter Stevens (Jake Gyllenhaal) waking up on a train that heading into Chicago and he realizes that he is somehow in the body of another person, Sean Fentress, a teacher.  And, oh yeah, there's a bomb on the train, too.  It turns out that Stevens is in military program called the Source Code that allows you to inhabit the body of a person 8 minutes before their death.  There is supposed another bomb exploding later in the day and Stevens has to figure who the bomber is to prevent another disaster from unfolding.  That was the easy part.

The audience shares those 8 minutes over and over again with Stevens as he tries to orient himself to his surroundings and narrow down the list of suspects.  I liked the parts where he had to solve the mystery, I just wish the suspects had been a bit more entertaining.  And I thought the location of the bomb was found out too easily.  Make the mystery a bit harder.

But, and there is a but the movie sells itself on the chemistry between Sean/Colter and Christina's characters.  Christina Warren (Michelle Monaghan) is a fellow commuter on the train and yes, you guessed it, the love interest.  Stevens becomes fixated on saving Christina which helps him succeed on his mission to find the bomber and leads to surprising twist of a ending.  I liked it, it showed promise.

Overall, a great action flick that I wish contained more of the mystery behind the who-done-it but covers it nicely by focusing the action on the main characters.  Definitely worth a watch.