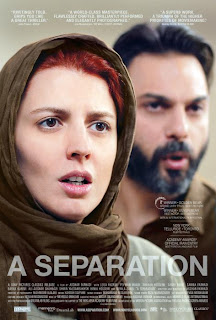 For months now, whenever anyone has spoken about how good A Separation is, I've tried to mentally tune what they were saying about the film.   It's been talked and written about everywhere and recently won the Best Foreign Film Oscar for Iran and was also nominated for Best Original Screenplay but I really wanted to experience watching the movie without getting spoiled on the actual story.  And what a great story it is.

My review after the cut as I discuss plot points and don't want to ruin the film for you.

A Separation is more than just a film about a dissolution of a marriage.  It's the events that occur after the decision to separate set forth a chain of events that tears apart two families.  Nader (Peyman Moadi) and Simin (Leila Hatami) can't come to a mutual agreement at a crucial moment in their lives.  Simin wants to migrate abroad for the sake their 11-year-old daughter, Termeh (Sarina Farhadi), while Nader cannot leave behind his father who has Alzheimer's. Still he doesn't allow her to divorce him and instead asks her to leave if she is unhappy.  She does.  She goes to live with her parents.

The day she leaves, a woman, Razieh (Sareh Bayat), evidently uncomfortable with the situation, comes to interview for the position of caretaker to Nader's father.  Still she agrees to come and look after him and brings along her young daughter.  On her first day, we learn two things which will become extremely important later on.  Razieh is clearly out of her depth in this position and she is also pregnant.

The next day, she tries to quit citing religious and personal reasons for not being able to handle the job and instead suggests her husband will come in her place.  But she says she doesn't want him to know she was working.  Already she is keeping things from him.

The husband doesn't show for work as he is taken away to prison by their creditors and Razieh is forced to come again.  Meanwhile, things are still strained between Nader and Simin.  Termeh refuses to leave with her mother and continues to stay with her father and grandfather.  Razieh still struggles to take care of Nader's father as he wanders away and soils himself instead of going to the bathroom.

When Nader is summoned by his wife to talk to him, he never realizes that she will ask what did he do that landed poor Razieh in the hospital?  Hereafter the film launches into so many different twists and an investigation of the events of that day that Nader threw Razieh out of his house that you won't know what to think.  Actually, don't think just react as the characters act out the emotional and difficult scenario in front of you.  One moment I was on one character's side but then I sympathized from where another was coming from.  I kept changing my sympathies until the very end.  Long after the movie ended, I was thinking of young Termeh and very difficult choice she has to make.  Iran's first Oscar winner is a must-watch that will stay with you.

Email ThisBlogThis!Share to TwitterShare to FacebookShare to Pinterest
Labels: A Separation, Movie Review