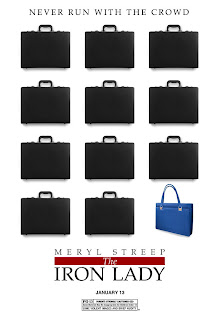 The Iron Lady is the story of Britain's first female Prime Minister with eleven long years in office, Baroness Margaret Thatcher.  The film shows Thatcher now as she is coping with the death of her husband, Denis and the diagnosis of Alzheimer's.

The best thing about this film is that Thatcher is played by Meryl Streep, actress extraordinaire, who literally becomes her with uncanny ability.  But that is the only good feature about it.  The film chooses to focus the story on Thatcher reminiscing and recollecting the major events and milestones of her life and career with late husband with whom she frequently chats.  This is not a spoiler as it is revealed in the film's first five minutes.

As this is based on the life of Thatcher, we see her as young girl inspired by her father, a grocer and aspiring politician and later as a young woman trying to break into politics.  She meets a businessman, Denis Thatcher, who supports her goals and later proposes marriage.  She warns him that she won't be a typical housewife washing up the tea as her life must matter to something.  To which he chides, that's why he's proposing.  And so she becomes Mrs. Margaret Thatcher.

The Thatchers have two children, twins Mark and Carol and even when they are young, Margaret ascends in politics becoming MP and rising up in the Conservative Party.  She even considers standing for Leader of the Party just to stir things up but instead is asked by fellow members to lead them.  They ask to relax her image, tone down her voice and change her clothes and hair.  There's a great line there when she says, "I may be persuaded to surrender the hat.  The pearls, however, are absolutely non-negotiable."

Thatcher wins the vote of her Party and the people and makes her way to 10 Downing Street, the first female Prime Minister ever.  There are flashbacks to the glory days of her career, standing up to the unions and her strict stand on the Falklands Islands that leads Britain to a naval battle against Argentina.  But there are also the dark days where she doesn't budge from the harsh taxes that affect poor most severely and refuses to listen to her fellow Cabinet members on various issues.  She believes what she believes in.  As the years pass, Thatcher's popularity wanes and she fails to win the votes necessary to keep her post.

In the end, the film presents Thatcher as a solitary figure thinking of days past.  She may not of a popular politician to most but it remains that she attained the highest post of power in Britain and held her own in a male-dominated world.  She deserved more than what the movie alludes to.  I was expecting much from the film than these vague assumptions.  The film was nominated for two Oscars for Best Makeup and Best Actress and won for both categories.  Most likely, the film will only be remembered for how much like Thatcher Meryl Streep looked and acted but not for the film's actual content.