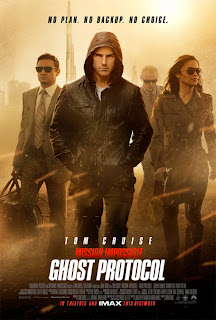 Mission: Impossible - Ghost Protocol is the fourth movie in the spy thriller based on the 1960s TV show Mission: Impossible.  Thankfully this film acknowledges previous storyline threads left hanging in the series and doesn't just explain them away in a single line of dialogue.

Brad Bird's (Ratatouille, The Incredibles) first foray into live-action does not disappoint and keeps us guessing as to what will happen next onscreen.  Ethan Hunt (Tom Cruise), our link through all the previous films, is back again, having recently been sprung by his old team from a Moscow prison only to break into the Kremlin to steal back some nuclear codes that have been stolen on a former mission gone wrong.  Just a typical day at the office!

Little does Hunt and his team know that they're being set up when part of the Kremlin is blown up and suspected to be the work of rogue spies, namely themselves.  As Ethan is informed by the IMF Secretary (Tom Wilkinson), the IMF no longer exists as the President has initiated Ghost Protocol.  (So that's where the title comes from.)  It's up to him, his team of Agents Jane Carter and Benji Dunn (Paula Patton, Simon Pegg) and newly acquired member and analyst, William Brandt (Jeremy Renner) to fix what has gone wrong and now blamed on them.

In order to clear their names (and save the world, of course), they travel to Dubai to the hotel Burj Khalifa, the tallest building in the world, to intercept a meeting and steal back the nuclear codes.  This is  by far the coolest and nerve-wracking sequences of the entire film.  Knowing that Tom Cruise performed those stunts himself makes it that much more amazing to watch.  Every member of IMF team does an incredible job and they almost manage to pull off the assignment.

So there's still the main villain (Michael Nyqvist), intent on starting a war between Russia and USA (Wasn't this also the plot to X-Men: First Class?), to hunt down and neutralize in a corner of the world I know well makes an appearance in the big climax.  Yes, the save the world sequence is held in Mumbai, in theory only.  The locations are definitely not in Mumbai but I must say that the high-tech car driven by Cruise at the end must be coveted by every driver, it forewarns you of pedestrians and gives your GPS right on the windshield.

Usually the technology in a spy thriller always seems so over the top and far-fetched and there a few occasions of that here too.  I would like to officially call a ban on the use of masks in this series.  Just say no, please!  But I admit to loving that Apple products such as your iPad or iPhone can pretty much be used to control anything.  Even the cool eye contact lens screen/printer seemed plausible.  If Google has its way, this could be our reality someday.

Despite holding his own in the film and in a lot of physical fights, Cruise is starting to look a bit old for the franchise.  Jeremy Renner's (who I was so sure would be an Oscar winner back in 2010) character Brandt was introduced that if Cruise no longer starred in it, he could take over.  After The Bourne Legacy, this would be the second franchise on Renner's shoulders.  Other notable but brief appearances came from Lea Seydoux (Midnight in Paris), Anil Kapoor (Slumdog Millionaire) and Josh Holloway (Lost), whom I didn't recognize without his trademark Sawyer beard at first.  I wish his role had be a bit more larger.

The latest Mission: Impossible is highly enjoyable and I wish I gotten a chance to see this in IMAX.  The film, with the deft direction of Brad Bird and a splendid soundtrack by Michael Giacchino, is totally worth every penny you spend on it.  The title sequence is also well done and reminded me a bit of The Incredibles.  A worthy addition to the franchise.

Directed by Brad Bird; Written by Josh Appelbaum, Andre Nemec, Based on the TV Series by Bruce Gellar; Cinematography by Robert Elswit; Edited by Paul Hirsch; Music by Michael Giacchino.