Thanks to Entertainment Weekly, we have four new characters posters from Brave to fawn over, telling us a bit more about themselves and from co-director Mark Andrews. 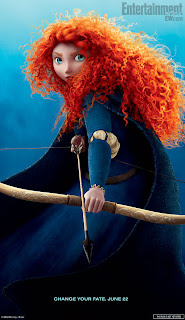 First up is Merida herself with all that unruly reddish gold hair.  Of course, she's pictured with her bow and arrow ever ready for some adventure.  Merida wants to go against ages old tradition and asks a witch to grant her a wish that goes horribly wrong. 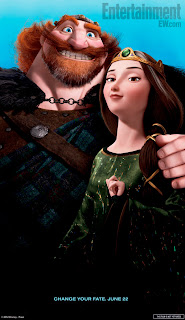 Next we have Merida's parents King Fergus and Queen Elinor.  King Fergus is the ruler of DunBroch kingdom and he likes to tell the story of the time when he lost his leg to the big bear Mordu while Queen Elinor is "the" woman behind the king, the one who runs it all and she wants Merida to grow up and assume her responsibilities. 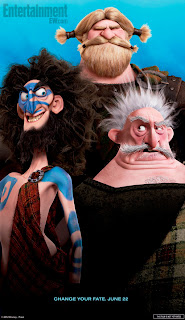 The three Scottish warriors are Lord Macintosh, Lord MacGuffin and Lord Dingwall.  Merida has to marry the son of either of these Lords and she's not going willingly. 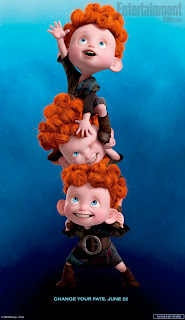 And finally we have Hamish, Harris and Hubert aka The Triplets and Merida's younger brothers.  They  share the same shade of red as their sister's hair and are always getting into trouble.

Interestingly, this movie is yet not rated.  The Incredibles was the first Pixar film to get a PG rating, followed by Up, will Brave join its ranks?  All these character posters come with the tagline 'Change Your Fate'.  We find out more on June 22.