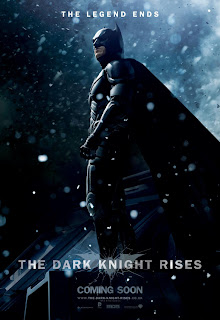 Let’s get this out of the way.  The Dark Knight Rises is not like The Dark Knight, nor does it even top the magnificence of that film.  What remains is a fitting and satisfying conclusion to the trilogy and universe as presented by director Christopher Nolan, his cast and crew.

Batman Begins was all about pain.  The Dark Knight was about chaos.  The Dark Knight Rises is all about fear.  Fear as instilled by villain Bane (Tom Hardy) onto Gotham’s citizens in a warped bid for them to claim back their city.  Who can stop him?  Can Batman?  That becomes the question of this film.

When we last left Bruce Wayne aka Batman (Christian Bale), he had been put through the wringer by the Joker (the late Heath Ledger) and left shaken by the events that took place at the end of The Dark Knight.  It has left him a recluse who has lost interest in life.  It definitely is a shock to see Wayne at the start of the film, unshaven with sunken eyes and leaning on a cane.  He is roused out of this state by the theft of his mother’s pearls by Selina Kyle (Anne Hathaway) who peaks his interest to follow her out of the house.

And as he does so, he begins to discover the peace achieved in Gotham due to the Harvey Dent Act is slowly eroding away and something big is about to happen as he begins to investigate Bane.  Equally alarmed are Commissioner Gordon (Gary Oldman), who looks just as haggard as Wayne does, and rookie cop John Blake (Joseph Gordon-Levitt) who start to pick up on the right leads a little too late.

Bane ruthlessly goes ahead with his plan to take over Gotham by systematically overpowering the police, the politicians and citizens.  He exposes the deep divide between the haves and the have-nots.  But by then Gotham has descended into complete anarchy by Bane’s terrorist methods.  And it will be up to citizens to save themselves unless Batman comes through for them once again.

What I loved about the film is that Nolan knows his audience and who he’s making his films for and makes no apologies for it.  This is a long film which takes its time to tell the story.  There are so many action and fantasy films that do away with explanation for sake of the big bang.  This film melds both together wonderfully.   The consequences of the previous films are felt deeply here, previous characters (Joker notwithstanding) do not just melt away, they come back to haunt you.

The characters, who have been there since the beginning, like Gordon and Alfred, they too must atone for their earlier transgressions which begin to weigh in on their conscience.  Gary Oldman, Michael Caine and Morgan Freeman are at their usual best and it’s quite comforting to see their presence onscreen.

Selina Kyle is never called Catwoman throughout the film for which I was grateful.  The name brings back unwelcome images from the disastrous 2004 Halle Berry film.  Hathaway plays Selena as a mercenary jewel thief albeit one who develops a conscience later on.  She was a welcome match and partner for Batman in his adventures.

The real standout of the film, for me, was Joseph Gordon-Levitt who has quite a substantial role than we were lead to believe.  His John Blake is a young idealistic police officer who calls it as it is.  He took on more and more of a leadership role as the film wore on and it looked good on him.  The new cast additions to the film with possible exception of Marion Cotillard’s weak Miranda Tate were stellar choices.

Tom Hardy’s Bane is a massive hulk of a man and Batman is physically no match for him.  Whilst Bane is also no match for Joker’s unhinged chaos and no one can touch Heath Ledger’s performance in The Dark Knight.  It’s in a league unto itself.  While many complained about his garbled speech, I never felt I couldn’t understand him.   Bruce Wayne’s problem is that he allows these villains such as the Joker, Bane and Ra’s Al Ghul to take up residence in his head allowing them to affect his actions.  Now older, he must learn to control his emotions.


Christian Bale is outstanding in his final outing as Bruce Wayne and the Batman as he comes to terms with his capabilities and demons.  Just as Heath Ledger's The Joker is the standard to which all villains are measured so will other portrayals of Batman be ever compared to Bale's take on the iconic superhero.  He really is the chameleon actor of our generation, picking diverse and intriguing characters that stay with you long after you leave the theater.

The action sequences are done with minimal CGI and they are quite stunning.  The introduction of Bane, the return of the Batman after 8 years and the lengthy climax will have you glued to the screen.  The Batmobile and his Batpod both have an update and they still are awesome as ever.  Hans Zimmer has done it again.  His chilling score, especially the chant, is fits perfectly over the sweeping sequences.  The music raises the action to another level of excitement and anticipation.

There are times that we forget that this is a comic book superhero film as you begin to believe in the universe that has been created for the screen.  This particular Batman trilogy has rescued Batman from the 1990s and brought it back into popular culture.  Nolan’s Batman films contain tortured characters, epic sequences of cinematic proportions, jaw-dropping twists in a gripping tales which all excite and remind us that this is why we come to watch a film on the big screen.

This trilogy can be compared to the Star Wars trilogy in terms of the middle film being the best of the lot and the last film tying up all the knots in the air.  But this film does more than that as it proves to be a satisfying goodbye to the franchise.  It has most certainly been worth the wait.