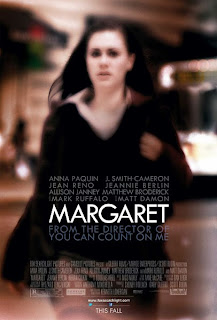 I was drawn to see this film particularly because of its troubled path to release.  For years, Margaret has been stuck in limbo due to problems that arose during the editing process between the director Kenneth Lonergan and the studio and producers.  But the buzz grew that Margaret was too good to be ignored with a great cast to boot.  There are many champions of the film and therefore we get to see a film edited down to 150 minutes from its rumored three hour director's cut which lay unfinished.

Margaret is a very unusual film.  That's the best way to introduce it.  It shows the ordinary life of a New York teenager Lisa Cohen (Anna Paquin) whose life is changed profoundly when she witnesses an a gruesome accident.  This may venture a bit into spoiler territory here but I believe the reason it affects her so deeply is that she begins to feel guilty about her own role in the accident that she can't manage to shake off it of herself as you would with a change of clothing.  It seeps into every aspect of her life.  Into her relationship with her parents, especially her mother, her friends and even the people she meets as a result of the accident's aftermath.

Lisa makes some spontaneously terrible decisions as only a teenager can, with little thought to the consequences.  And yet sometimes she overthinks things too much.  What she is doing though through her actions is calling out for help and no one knows how to deal with Lisa, least of all Lisa herself.  Her mother (J. Smith-Cameron) is bewildered and emotional most of the times.  Her well-meaning attempts at any help are brushed aside.  Her teachers offer counsel but other than some fascinating classroom discussions, that too, doesn't lead to anything.

The film is well intentioned and wants to show a young person's perspective on life but stumbles in its execution.  The editing cuts are strange at times, we are left out of some conversations deliberately; sometimes the scene linger on, uncomfortably so.  Is it intentional?  Maybe, maybe not.  As the film was shot so long ago, it feels from another time yet strangely relevant and the actors look like slightly younger versions of themselves.  Matt Damon, playing a high school teacher, barely looks out of school himself.

Anna Paquin carries the lead role well even as her character get shriller and shriller trying to understand this event that has changed her life.  I was glad, though, that Lisa finally got the emotional catharsis she needed before the film ended or else she really would have exploded.  The supporting cast are old Lonergan familiars and they flit in and out of the film.  If you were wondering about the title which doesn't refer to any character but instead a poem by Gerard Manley Hopkins.

Despite being able to finally view the film, I really do wish I could get to see the director's cut, however long it may be.  It might have brought in some clarity to what the director was trying to say.  If you do watch the film, allow the film to grow on you.