Is it Oscar day already? It really does sneak up on you, doesn't it?  Well, since it's that time of the year, it's time for me to pick my picks in this highly unpredicatable and crazy year of 2012 where no one could have predicted so many great films all going up against each other with no clear frontrunner as the rules keep changing.  However, I do give my edge to Argo and Ben Affleck who's having a wonderful 2012.  Take a look at my picks below. 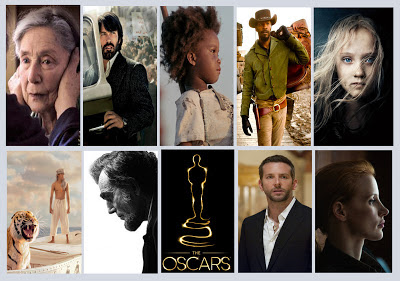 Best motion picture of the year

Will win: Argo. It has swept every major guild and non-guild award out there.  It's a safe bet for best picture and plus, it doesn't hurt that two incredibly handsome men (producers George Clooney and Ben Affleck) will probably end up giving a great speech.
Should win: Zero Dark Thirty. I was just blown away by this film and its powerful retelling of the 'greatest manhunt in history' and the female power of director Kathryn Bigelow, producer Megan Ellison and the incredible lead performance of Jessica Chastain. Years from now, people will look back at how under appreciated this film was.
Possible upset: Lincoln or Life of Pi. This a crazy year for predicting the Oscars, it could all go to plan or not at all. I wouldn't count out these two films with the highest nominations, with 12 and 11 respectively. Everyone keeps listing Life of Pi as their favorite film of the year (me too!) and well, Lincoln, has great pedigree on and off the camera.  I wouldn't be shocked if they won either.


Performance by an actor in a leading role

Will win: Daniel Day-Lewis.  He's Daniel Day-Lewis, greatest actor alive.  Nuff said!
Should win: Joaquin Phoenix.  I finally got around to watching The Master and I couldn't believe Phoenix's performance, it's on another level. I'm glad he got recognition for this fearless role despite his comments in Interview magazine.  It would have been a travesty.
Possible upset: Joaquin Phoenix.  Just to make things more interesting this year.

Performance by an actor in a supporting role

Will win: Tommy Lee Jones.
Should win: Tommy Lee Jones. His is the real great supporting performance in this category of former Oscar winners and all great actors.
Possible upset: Robert De Niro. De Niro has really put it out there that he really wants another Oscar to the point of breaking down his tough guy exterior and it has been awhile since he last won.  You never know.

Performance by an actress in a leading role

Will win: Jennifer Lawrence.  I have wavered between Riva and Lawrence for weeks and I'm finally settling on Lawrence.  This could become the real wildcard category of the night. We've got a nominee who's turning 86, a cute and unpredictable nine year old (think of the speech she'll give) and two women (Lawrence and Chastain) whose careers are at their peak right now.  It's anyone's to capture, I believe.
Should win: Jessica Chastain.  Everyone says that there no good roles for women out there anymore but Chastain's Maya was the best written and enacted role of 2012 for me.
Possible upset: Emmanuelle Riva.  It's her 86th birthday, Oscars make great birthday gifts. (hint, hint)

Performance by an actress in a supporting role

Will win: Wreck-It Ralph.  This was a clever, fun and heartfelt ode to video games and gamers. Ralph leads head and shoulders above the competition.
Should win: Wreck-It Ralph.  Walt Disney Animation has truly profited by having John Lasseter as the head of the studio and the quality of the films coming from it has been completely story oriented.  Hence the three nominees this year over rival DreamWorks zero.
Possible upset: Brave. Never count out Pixar and its legions of fans. And the movie has picked up quite a few technical awards in the past months to make it a competitor.

Will win: Life of Pi's Claudio Miranda for the some of the most stunning visuals in a film.
Should win: Roger Deakins who has never won an Oscar in his long and storied career for one of the best-looking Bond films ever.
Possible upset: Roger Deakins.

Will win: Anna Karenina. It's such a costume film.
Should win: The late Eiko Ishioka for Mirror Mirror.  Her costumes in Tarsem Singh's films were so incredibly key to his look and vision.
Possible upset: Colleen Atwood for Snow White and the Huntsman.

Will win: Ang Lee. It really is a two man race between Lee and Spielberg now that Ben Affleck and Kathryn Bigelow aren't even part of the conversation.  However, I give the edge to Lee who really made a spectacular film out a book that many thought could never be translated to screen. In breathtaking 3D, no less!
Should win: Ang Lee
Possible upset: Steven Spielberg.  Lincoln is a reverent and grownup effort of Spielberg's and it shows in every frame.

Will win: Searching for Sugar Man.  Like Argo, this has won every guild and non-guild award. The second safe bet of the night.
Should win: Searching for Sugar Man
Possible upset: The Gatekeepers.  This was the one I wanted to see over all others but didn't get the chance. The first brutally honest look behind the scenes at the super secret Shin Bet should be fascinating.

Will win: Inocente.  Unfortunately I couldn't see any of the shorts so my pick here is going to be a guess.  I'd say Inocente based on what I've read and briefly seen.
Should win: Inocente.
Possible upset: Mondays at Racine, a moving look at women recovering from cancer who spend time at a Long Island salon.

Will win: Argo.  I changed my mind. Double nominee William Goldenberg is definitely a frontrunner with Argo and Zero Dark Thirty but I have the nail-biting thriller ending of Argo will prevail. I had previously thought Lincoln would have a shot but it's definitely Goldenberg's year.
Should win: Zero Dark Thirty. Encapsulating a ten year odyssey for the search for Osama bin Laden is no mean feat but Zero Dark Thirty was amazingly paced leading to that raid at Abottabad.
Possible upset: Silver Linings Playbook.  Never underestimate the power of a good rom-com that too one that has the backing of Harvey Weinstein.

Will win: Amour.  The surest bet of the night.
Should win: Amour
Possible upset: None.

Achievement in makeup and hairstyling

Will win: Les Miserables. One of the reasons I disliked the film is it was too realistic in some ways and not realistic enough in others but the makeup (mouth sores, missing teeth and dirt) was part of the important process of turning the actors into characters from the French revolution.
Should win: Les Miserables.
Possible Upset: The Hobbit. Have you seen the 13 dwarves?

Will win: Life of Pi. This is one of my favorite categories after animated feature.  Looking back at the iconic and famous soundtrack that have won previously, I feel Danna's score fit Pi's emotional journey perfectly.
Should win: Life of Pi.
Possible upset: Alexandre Desplat for Argo. Desplat has scored 8 films this past year including Zero Dark Thirty, Rust and Bone and Moonrise Kingdom.  Such work doesn't go unnoticed.

"Before My Time" from "Chasing Ice"
Music and Lyric by J. Ralph
"Everybody Needs A Best Friend" from "Ted"
Music by Walter Murphy; Lyric by Seth MacFarlane
"Pi's Lullaby" from "Life of Pi"
Music by Mychael Danna; Lyric by Bombay Jayashri
"Skyfall" from "Skyfall"
Music and Lyric by Adele Adkins and Paul Epworth
"Suddenly" from "Les Misérables"
Music by Claude-Michel Schönberg; Lyric by Herbert Kretzmer and Alain Boublil

Will win: Lincoln. It's a historical film praised mostly for its accuracy.
Should win: Lincoln.
Possible upset: Anna Karenina. Joe Wright took a risk in placing the story in a theatrical stage literally, the endeavour could pay off with a win.

Will win: Paperman. All five shorts became available to view online allowing viewers like us to actually have a chance to know who to pick.  The Disney short is the most charming story of the bunch.
Should win: Paperman.
Possible upset: Head over Heels. The lone student film of the bunch, the short is a tale of a married couple who drift apart.

Will win: Life of Pi
Should win: Life of Pi.
Possible upset: None.  The beleagured studio Rhythm & Hues has been in the news a lot lately with its bankruptcy woes but it's undeniable that the star of the film and it's heart is Richard Parker, the CGI tiger.  Last year it was Caesar and this year, it's Richard Parker, someday soon we might see a Best CGI character category.

Will win: Argo
Should win: Lincoln.  Somewhere along the way the narrative changed and Lincoln's sureshot in this category changed to a hasbeen.  There's a reason why this film will be shown in schools as a history lesson on the how the 13th amendent to the Constitution was eventually passed.
Possible upset: Silver Linings Playbook. (see film editing)