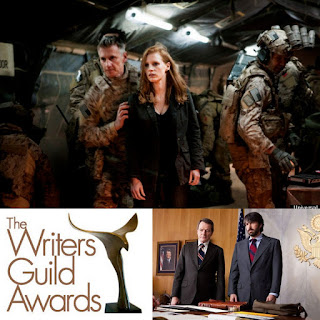 PGA, SAG, DGA and now WGA.  That's a clean sweep of the guilds for Argo.  Can anyone derail the Argo train? My Magic 8 ball says 'Don't count on it.' There are some great movies out there but this really has become Argo's year.  Zero Dark Thirty also pick up an award for Original Screenplay for writer Mark Boal.  I really do hope it doesn't get shut out at the Oscars.  That would be a shame.

Here are the complete film winners:

ADAPTED SCREENPLAY
Argo (Warner Bros Pictures) – Screenplay by Chris Terrio; Based on a selection from The Master of Disguise by Antonio J. Mendez and the Wired Magazine article “The Great Escape” by Joshuah Bearman