The BAFTAs that were held this past Sunday brought confirmations in certain categories for plenty of frontrunners. Yes, Anne Hathaway and Daniel Day-Lewis, you might starting polishing up that winner's reaction shot.  But it definitely brought across some major surprises in some categories as well.  David O. Russell for Best Adapted Screenplay! Thomas Newman for Best Music! and most importantly, Emmanuelle Riva for Best Actress.  I still think Jennifer Lawrence is safe for Oscars but just in case, maybe it's not wise to write out that speech just as yet.  The night also brought some major love out for one British icon in James Bond as Skyfall won the BAFTA for Best British Film.   Word to the producers, bring back Sam Mendes for the next film as well. 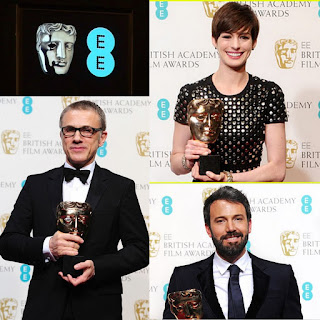 Here are the winners: