Blast from the Past: Big's 25th Anniversary 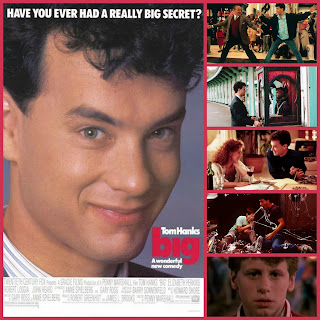 It’s hard to believe that 25 years ago, today on June 3, 1988, a little movie called Big released that made everyone, kids and adult alike want throw away abandon and go crazy in a toy store. The film was star Tom Hanks' second big success and director Penny Marshall became the first female ever direct a movie that grossed more than $100 million at the box office. That actually was a Jeopardy question once, I recall.

Can you imagine that Robert De Niro was also offered the role? I can’t visualize anyone but Tom Hanks and his infectious smile in the role of Josh Baskin, a 12-year-old who, while visiting an amusement park, isn't tall enough for the ride. Who hasn't experienced that heartache in front of friends you want to impress?  Depressed, he makes a wish at magic machine named ‘Zoltar’ and utters the famous words, ‘I wish I was big!’

Suddenly, he's an adult who has to get a job (albeit the coolest one), an apartment and navigate the tricky business of having a co-worker (Elizabeth Perkins) who's interested in him.  I remember watching the film as a young child with my cousins (all teenagers) at home on a VCR (remember those things?) and being so glad to be allowed to hang out with them.  It's one of my earliest movie memories and I recall the scenes in grown up Josh's apartment quite clearly.

And of course, who can forget the famous scene in FAO Schwartz with Robert Loggia and Tom Hanks banging out a melody on that giant piano?  Visiting FAO Schwartz held a special memory for me after the film as well. The movie is extremely nostalgia and bittersweet for me to watch.

There was great talent behind the screen as well.  Big was written by Gary Ross and Anne Spielberg, sister of Steven Spielberg and produced by James L. Brooks.  The film obviously cemented Penny Marshall's craft after a successful acting career.  Big even made it onto Broadway in 1996 and was even nominated for Tonys for its actors and choreographer Susan Stroman.

25 years! And still going strong... have a look at the trailer for Big.  What do you most like about the film?