Yesterday, the American Film Institute (AFI) bestowed legendary filmmaker Mel Brooks, a true comic genius, with their highest honor, the Lifetime Achievement award. I adore his films and they never fail to cheer me up.  Brooks is one of only 11 people in the world who can claim the ownership of the prestigious EGOT (winner of Emmy, Grammy, Oscar, Tony) awards which is oh, so coveted by many, many people including 30 Rock’s Tracy Jordan.   It’s always a treat watching Brooks give interviews because nobody and I mean nobody tells a story quite like him.  Take a look:

This got me thinking about some of my favorite Mel Brooks films.  Here they are (in no particular order): 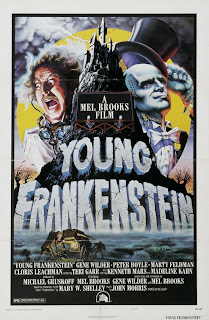 Young Frankenstein (1974): If you’ve never seen this film, then you’re doing yourself a great disservice. Gene Wilder plays the grandson of Frankenstein (“It’s Frankensteen”) who returns to the homestead with assistants Igor (Marty Feldman) and Inga (Teri Garr) and eventually recreates the legendary monster (Peter Boyle).  A black and white satirical homage to the monster flicks of the 1930s, the film also features great supporting performances from Cloris Leachman (her character, Frau Blucher is a highlight), Madeline Kahn and Gene Hackman (if you can recognize him).  The film has so many indelible moments, Wilder and Boyle performing their unforgettable song and dance routine on stage to Frankenstein questioning Igor about which brain they used to my favorite scene featuring a revolving secret door. It has me in stitches every time. 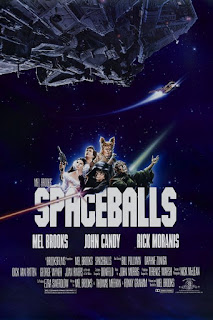 Spaceballs (1987): “May the Schwartz be with you.” If you know what these words mean, then congratulations, you are a Mel Brooks fan! This parody of Star Wars features memorable characters like Princess Vespa (Daphne Zuniga), Barf (John Candy), Han Solo stand-in Lone Starr (Bill Pullman)and Pizza the Hutt, spaceships that go at ‘ludicrous speed’ and Mel Brooks himself in a double role as President Skroob and Yogurt (the gold-dusted version of Yoda).  It’s all silly fun but Rick Moranis’ Dark Helmet stands out for me from the scenes of him playing with his action figures or when he's trying to watch the film to figure out what’s going to happen next and always fidgeting with his humongous helmet. 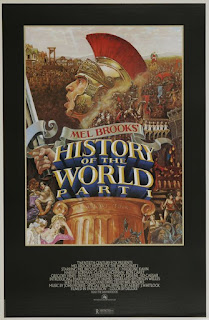 History Of The World Part 1(1981): Folks, here’s a spoiler alert for you. There is no Part 2.  However, that is no deterrent for you not enjoying this cracker of a film which takes us through the Stone Age, the Roman Empire to the Spanish Inquisition (which comes with its own musical number) and the French Revolution.  We are shown glimpses of other important events, for instance, there were initially 15 commandants until Moses broke the other tablet.  The film contains many hilarious exchanges and dialogues like my personal favorites, ‘It’s good to be the king,’ ‘Oh, you are nuts. N-V-T-S, nuts!,’ and ‘Say when,’ ‘8:30’.  History of the World Part 1 has all of Brooks’ regular collaborators like Kahn, Leachman, Dom DeLuise and even actors like Gregory Hines in a prominent role and Orson Welles narrating the film. 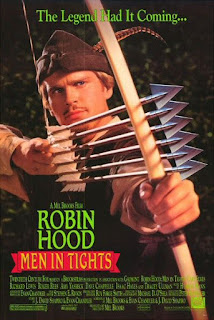 Robin Hood: Men In Tights (1993): This spoof of previous Robin Hood features served as an introduction to Mel Brooks for me when I was in school and prodded me to go back and look up his filmography.  There was a time when my friends and I knew all the dialogues to this and I’m sure if I say something like, ‘I have a MOLE?’, they’ll know exactly what I’m talking about.  Robin Hood, played by Cary Elwes, ‘can speak with an English accent’ and the Merry Men are also rappers in tights (hence the title).  You can spy a young Dave Chappelle as Ahchoo and some hysterical turns by Roger Rees as the Sheriff of Nottingham and Tracey Ullman as Latrine whose scenes together made me laugh so hard I cried. 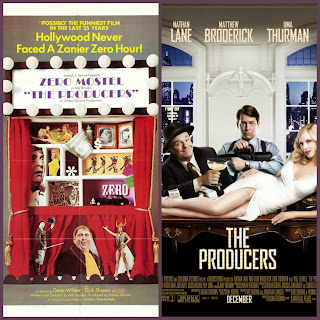 The Producers (1968) and The Producers (2005): In any incarnation, this story is still comedic gold.  A Broadway producer (Zero Mostel) and his accountant (Gene Wilder) make the worst show in the history of the world, a musical on Hitler called Springtime for Hitler, knowing full well it will fail spectacularly and then take all the money to the bank.  But how then do little old ladies, a Swedish secretary named Ulla and a German playwright obsessed with his pet pigeons have to do with the film? You’ll have to see it to believe it.  Younger audiences of course know of The Producers because of the very successful production on Broadway with Nathan Lane as Max Bialystock and Matthew Broderick as Leo Bloom which was later turned back into a movie.  Brace yourselves as you’re in for a crazy, funny and diabolical ride of a movie in which anything goes. 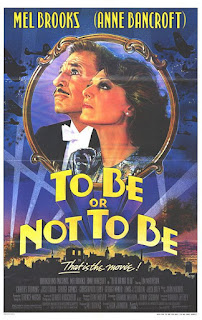 To Be Or Not To Be (1983): I don’t know why, but I adore this color remake of Ernst Lubitsch’s 1942 classic To Be or Not to Be.  Mel Brooks plays Federick Bronski, Polish actor who along with his wife, Anna Bronski (the sublime Anne Bancroft, also Brooks’ wife in real life) perform their revue show during World War II until the Nazis descend on Warsaw and they have to ‘act’ their way out of a tough situation.  Bronski fancies himself quite the actor and includes Hamlet’s famous soliloquy with the famous line, ‘To be or not to be…’ which receives an unwelcome interruption by Tim Matheson each time he tries to perform. This was one of the few times that Brooks and Bancroft acted together onscreen.  Veteran actor Charles Durning even received an Oscar nomination for his supporting role as Colonel Erhardt.