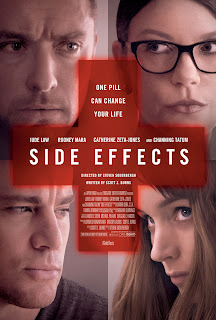 Side Effects is dark, twisty and completely mesmerizing.  There's never a dull moment in it.  Director Steven Soderbergh's last few films have been quite in form and it's hard to accept the fact that this film might very well be his last big screen movie.  He hasn't ruled out television (see Behind the Candelabra) so we still have hope.

As the film opens, we get closer and closer to a nondescript building as we enter the apartment of a young couple, Emily (Rooney Mara) and Martin (Channing Tatum), to immerse ourselves into their troubled lives.  We get information about their lives through them and well-meaning outsiders who just want the best for them.  Martin is recently released from prison for insider trading and trying to get his life together again.  His wife, we're told and shown, is depressed.

After a failed suicide attempt, Emily is advised by the hospital psychiatrist Dr. Banks (Jude Law) to come in for therapy and on some medication.  Still she remains melancholy and in a decision that comes back to haunt major characters later, gets prescribed to a new and powerful drug Ablixa.  And then Emily while sleepwalking, a side effect of the drug, kills Martin and goes back to sleep.

Here's where the story picks up as the case heads to trial and Dr. Banks gets his life thrown upside down and later does his best to regroup and get back together again.  Those closeup and random throwaway shots that we get a glimpse of early in the film gain greater meaning as more and more information is revealed. An early shot of Emily glancing at her distorted reflection in the mirror by the bar says so much on so many levels.

Soderbergh does well to reveal each piece of the puzzle to us.  The only time I felt he faltered was at the obligatory flashback at the end of the film.  He handles the actors deftly and draws a fascinating performance out of Rooney Mara. She never picks uninteresting roles.  But eventually Jude Law, as the bewildered doctor, Channing Tatum, as the clueless husband and Catherine Zeta-Jones are the former psychiatrist are basically in supporting players to Mara's Emily.

This film has many Hitchcockian elements, a man wrongly accused, a scary sequence with a knife and several moments where the characters withhold information again and again which might frustrate some.  But this is a good thing, trust me, it makes it far interesting for us, the audience.  It also works well as a dark commentary of the dangers of anti-depressants and the reliance on medication that we as a society now have.

Side Effects didn't do well in its theatrical run but I have a feeling it will do better in this word of mouth format as it makes the DVD rounds.  Do it give a chance, you'll definitely be rewarded with a layered, thrilling drama.