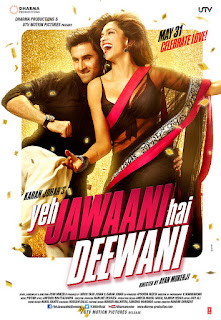 The last time Ayan Mukerji and Ranbir Kapoor got together, they produced the real and extra likable Wake Up Sid (a very different Dharma Productions film).  I remember being very impressed by the pair of them back in 2009.  This time as they are back for Yeh Jawaani Hai Deewani, the real is missing her but instead we have great leads and supporting players who deliver some great moments of friendship, laughter and good times.

Naina (Deepika Padukone) is the stereotypical straitlaced girl in most films who is scholarly when she wears glasses and sheds her inhibitions once the glasses are off.  Kabir aka Bunny (Ranbir Kapoor) is her opposite, who loves to experience life and wants to explore the world.  She is happy with who she is, where she is.  Meanwhile Bunny can't stay in one place for too long and is always longing for more adventures.

Yet these two meet on a trek to Manali which Naina tags along at the last minute to experience some fun and spontaneity in her life.  Also on the trip are Aditi (Kalki Koechlin) and Avi (Aditya Roy Kapur) who along with Bunny are best friends. Along the way, hijinks ensue, songs are sung and Naina and Bunny begin their journey of falling in love.

But of course, they must part only to meet again and realize what they really want. This obstacle doesn't make that much sense and seems forced in the screenplay only to be solved quite neatly in a sequence set in a palace wedding in Udaipur.  No, really! This is a Dharma Productions film, what did you expect? The majority of the songs are extremely pleasing to the eyes and ears and only 'Dilliwaali Girlfriend' seemed unnecessary.

Ranbir and Deepika's chemistry is crackling and their moments onscreen are hilarious and very endearing.  Ranbir is super charming (sigh) and absolutely effortless in any kind of scene one can throw at him. You'd fall in love with him too.  Deepika surprised me.  She really has improved film to film.  Kalki Koechlin also seems quite different in the film and I especially enjoyed how real and gritty the friendships between Avi, Aditi and Bunny felt.

This is where the true strength of the film lies and not in the romance it's marketed to be.  All in all, it's an enjoyable trip to the cinema especially if you're a Ranbir Kapoor fan which I'm guessing many people are.

PS-Kunal Roy Kapur has a small role in the film but he totally shines every moment he's onscreen.

(an extra gold DVD for Ranbir)