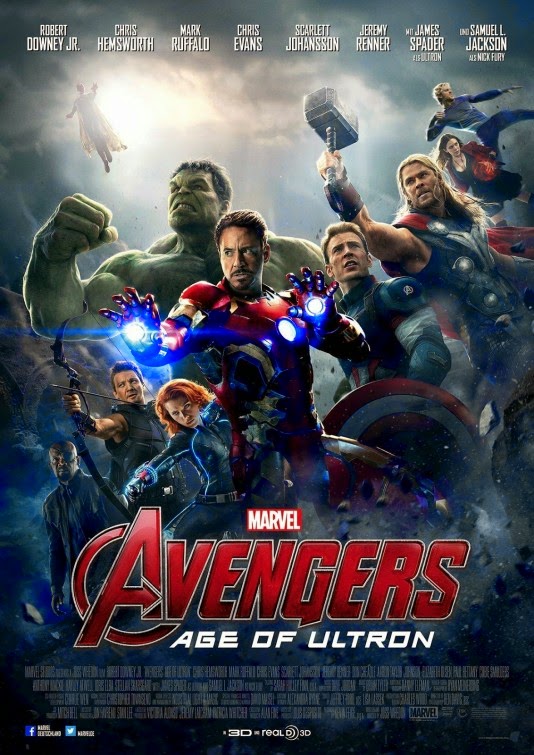 Avengers: Age of Ultron begins without much preamble, dropping us right into the action. There are no individual superhero entrances this time around. The Avengers are a team or so the world thinks, and they are there to protect the Earth against all evil forces, alien or human. But the challenge in this thrilling sequel to The Avengers is neither alien or human. Instead they are faced with an A.I. out to ruin them all.

The key to enjoying Marvel's Cinematic Universe films is to remember that they're all connected. The movies and TV shows all borrow heavily from the comic books in which all the characters are created. So if you saw last year's Captain America: Winter Soldier and Guardians of the Galaxy and followed Agents of S.H.I.E.L.D and Agent Carter, you'd know that the evil group Hydra had infiltrated S.H.I.E.L.D. breaking it down to its core. Only a few remain dedicated to the real purpose of keeping the world safe. The Avengers are part of the few and dedicated, only in this film their methods of getting that done comes into question.

After recovering Loki's staff from Hydra and running into new Enhanced entrants to the films (the Wonder Twins,  Pietro and Wanda Maximoff), the Avengers return back to Stark Tower thinking that the battle has been won. Wrong, the water has gotten murky.  The science brothers Tony Stark (Robert Downey Jr.) and Bruce Banner (Mark Ruffalo) decide, on Stark's urging, that the Ultron program must be put to the test now that the staff is in their hands. Loki's staff, in case you've forgotten from the first film, contains one part of the famed Infinity stones given to him by Thanos. Control them all and you control the universe. Remember this, it will come in handy during future films.

The result of this unnecessary human meddling is the birth of Ultron (voiced by James Spader) who doesn't want to do the bidding of Avengers and wants to get rid of them altogether. As expected, this puts the Avengers at a crossroads. Steve aka Captain America (Chris Evans) and Tony have differing viewpoints on how to handle this. And after taking a beating going up against Ultron, Pietro (Aaron Taylor-Johnson) and Wanda (Elizabeth Olsen), the Avengers regroup at a safe house.

There are loads of revelations in this film. Each of the Avengers has hidden secrets and pasts they're not ready to confront. When up against evil forces, they are united but we've been given a sense that it won't last long. There are new recruits to the Avengers team and it looks like they might last. The Avengers, eventually, are just a unit of superheroes. It's not supposed to matter who's in it as long as they're together and can vanquish evil.

The newest recruit (literally, he was born yesterday!) is The Vision (Paul Bettany) who's a fascinating addition to the team. His introduction is the standout scene of the film. The film has way too many characters and each one is given a moment. It would be wonderful to linger on the Hulk (who really does need his own proper movie - the first two don't count!) and even Natasha (Scarlett Johansson) to figure out where they're coming from. But this movie is the link to what happens in the next upcoming Marvel films. Stay tuned to Captain America: Civil War where all will be revealed, it seems to hint.

This film is also the last time where Joss Whedon will be directing a Marvel film. The success of the first Avengers allowed directors like James Gunn and the Russo brothers to be signed onto the Marvel universe. His unique voice will definitely be missed in future films. The actors playing the Avengers seem to be at it for so long that playing their alter ego comes naturally to them, especially Robert Downey Jr. as Tony Stark. However, the real star of this film is CGI effects. Over 3000 of them!

The battle sequences are insane and take place all over the world. Thank you for sparing New York, Joss, I bet it's still recovering from the last one. Ultron and his army of lookalikes, the Hulk, the Hulk Buster, the Vision and Wonder Twins' abilities all loom larger with the amazing effects. The Avengers was extra-special because it was the first time you saw a superhero movie with such a grand scale all together on the same screen. Since then, many have tried to duplicate that, even this film, but nothing can really come close. I'm sure most of you out there will be watching but Avengers: Age of Ultron is really for the fans for the overall Marvel Cinematic Universe, stay tuned for the next chapter!

Written and Directed by Joss Whedon; Based on the characters created by Jack Kirby and Stan Lee; Cinematography by Ben Davis; Editing by Jeffrey Ford and Lisa Lassek; Music by Brian Tyler and Danny Elfman