Movie Review: Margarita, with a Straw 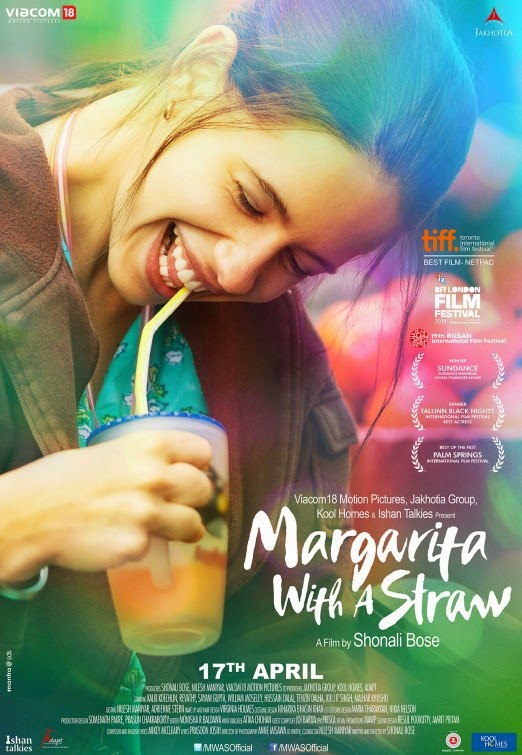 In the past few years, the Indian film scene has changed dramatically. Bollywood is still king and rules the box-office, but somehow running parallel are these small films with big heart that are penetrating through and reaching its audience. Margarita, with a Straw is one such film.

The film is the story of a young girl, Laila Kapoor (Kalki Koechlin), living in Delhi with her parents and younger brother. Laila is an aspiring writer who likes to pour her feelings into song lyrics. She likes being with her family and friends. She also happens to have cerebral palsy. In any other movie, this would have been drawn out and melodramatic (yes, Black, we're looking at you!). But here in this film, Laila is given her own voice and that's an extremely refreshing to view.

Only recently have heroine-oriented films begun to take centre stage (see Queen, The Dirty Picture, Kahaani). And for Margarita, with a Straw to have a young female lead who's also differently abled is proof that all kinds of characters can inhabit Indian cinema, and judging by the size of the audience in the theater I was watching, the audience is eager to see and know more.

Laila is able to have a normal upbringing mostly due to her loving parents. She's especially close with her mother Aai (Revathy) who encourages Laila to be herself. When a crush on her friend Nima (Tenzin Dalha) leaves Laila brokenhearted, Aai insists that she pursue her dreams of a creative writing course at New York University. In New York, both mother and daughter see a different side to life.

I read a review of this film which wondered why Laila's enlightenment had to take place in India. The answer was right there on the screen. Unfortunately, India is woefully inadequate when it comes to taking care of and incorporating the differently abled in the public sphere. Aamir Khan's show Satyamev Jayate did a wonderful episode dedicated to that very problem in his first season.

The reason why Laila's enlightenment happened in a city like New York was because she was just another citizen. She could board the bus by herself, do her own shopping or even attend a bar with her friend. Compare that to her humiliation at being carried up the stairs of her own school like a piece of furniture because the school lift perpetually doesn't work. Laila needed the experience of being in a city like New York to further blossom.

Laila also discovers who she really is by exploring her sexuality, first with a Pakistani-Bangleshi activist Khanum (Sayani Gupta) who happens to be blind, and later with her British classmate Jared (William Moseley). The story moves back to Delhi for the latter half where it gets a bit confusing when secrets revealed lead to further conflict but still the film never wavers about who Laila continues to be.

Margarita, with a Straw won the NETPAC award World or International Asian Film Premiere at the Toronto International Film Festival (TIFF) in 2014. The film is filled with great honest moments of Laila with her mother, with her friends and just being herself. While uneven at times, the film is forthright, funny and heartfelt, especially in the performances of Revathy and Koechlin. Their bond as mother and daughter rings true onscreen. If you are looking for distinct and unique voices in Indian cinema, do make it point to seek out Margarita, with a Straw.