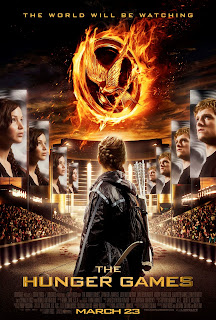 The Hunger Games was probably my second most anticipated film of the year after The Dark Knight Rises and I'm so pleased that they've both lived up to expectations.  As fun as the Harry Potter films were, the inner fan in me was always disappointed in the scenes they did leave out in the films.  No such problems here.  The Hunger Games delivers on all levels especially in the screenplay that touches on all the main points from the books and visually brings to life the spectacle of the gruesome games.

Katniss Everdeen (Jennifer Lawrence), a name we all now know as well as Harry Potter or Bella Swan, is a determined young woman who lives with her mother and sister Primrose (Willow Shields) in District 12 in Panem, a dystopian future where the Capitol rules over Districts just like the one Katniss lives in.  In this future, two tributes (i.e. children) from each district must be sent to the Capitol to participate in The Hunger Games to remind people of the uprising against Panem and serve as a reminder never to be occurred again.  The Hunger Games has echoes of the Greek tales of Theseus and the Minotaur as well but it borrows most of its themes from reality television we have grow so accustomed to.

Author Suzanne Collins takes the competition to another level with children fighting to the death to survive and bring stability and food to their Districts for a whole year.  And yes, with a title like The Hunger Games, there's a whole lot of focus on food.  When Primrose's name is picked the first year she's eligible for the games, big sister Katniss volunteers herself and sets up events that will change the history of Panem.

The other tribute and her competitor essentially is Peeta Mallark (Josh Hutcherson) with whom she has a complicated moment when she was younger and feels at her lowest.  The movie dwells on it and it's extremely important as it sets up how Katniss treats him.  Within no time, the pair is whisked off to the Capitol to participate in the games.  On the train, they meet Haymitch Abernathy (Woody Harrelson), their mentor and previous winner from District 12 along with their perky guide Effie Trinket (Elizabeth Banks).

The games are grueling, mentally and physically and the film does a good job of showing how you have to compete not just in the arena but to be savvy for the sponsors that will aide along the way and be liked by the public that supports you as well.  Isn't that the case with any reality show participant? It's not how good you are, it's how well you play the game.  Peeta has a better handle on this as he knows it's his best chance to survive while Katniss is focused on her survival skills for the arena.

Both of them are up against formidable foes like Glimmer (Leven Rambin) and Cato (Alexander Ludwig) who won't think twice before killing and possible allies like Thresh and Rue (Amandla Stenberg) who are just like them trying to stay alive. Like in any reality show, alliances are made and then cruelly broken when it becomes clear, it's all about you in the end.

Haymitch, who tries to procure sponsors so that his tributes stay alive, tries to spin "the star-crossed lovers" angle for Katniss and Peeta.  They have to rely on each other to make it through the ordeal.  Besides the clueless public and the sponsors, overseeing the games is Head Gamemaker Seneca Crane (Wes Bentley) who throws in fire and wild animals to prod the contestants when he thinks the action onscreen isn't interesting enough.  However, the man running them is all, President Coriolanus Snow (Donald Sutherland), is a shrewd leader who's sees beyond Katniss' minor rebellions on the show and the effect it has on the people in the outer districts.

The movie deals with all these characters well, introducing them and setting up their character arcs, only Gale (Liam Hemsworth), Katniss' best friend and Cinna (Lenny Kravitz), her stylist and designer aren't given enough time to develop fully.  But as is the case with any big Hollywood film, it'll all be dealt with in the sequel.  Katniss' story is told through three books that make up The Hunger Games trilogy and the second film is due out next year.

The differences between the Capitol and the outer districts is staggering.  The Capitol is a bustling city of tomorrow whose citizens are obsessed with plastic surgery, color and fashion while in the outer districts, every day is a struggle to survive for basic needs like food and shelter. The bleakness vs. the vividness of the Capitol is seen right away and I'm guessing we'll see more of it in the movies to follow as well.

The costumes are pretty much what I imagined except I thought the flames on Katniss' Girl on Fire dress would be higher.  The movie makes them more realistic.  The mutations were also less scary than they are described in the books; they have the eyes of the fallen tributes and they taunt Katniss, Peeta and Cato.  I guess that would have made it into a stronger rating for the film maybe that's why the idea was dropped.

And lastly the reason why the film was so enjoyable was due to Jennifer Lawrence.  She almost has the same journey as Katniss.  Even though she's an Oscar nominee last year, many people didn't know who she was.  Now, with the promotion and the kind of money the film has made, everyone knows who Lawrence is.  She portrays Katniss' survival instincts and her fear of losing her sister like second skin.  She really is a fine young actress and you identify instantly.  The rest of the actors are all well cast and this becomes the rare case in the film where the actor is cast for the acting and not because he/she looks the part as can be argued for Josh Hutcherson for Peeta Mallark.

The movie will bring in new fans who obviously haven't the books and while the film is very thrilling and exciting, the books have this urgency and fear that can't be translated onscreen.  The Hunger Games has given us a new heroine to root for in Katniss Everdeen and I can't wait to see the rest of her journey as she leads an uprising against Panem.  Trust me, you'll be hooked too.