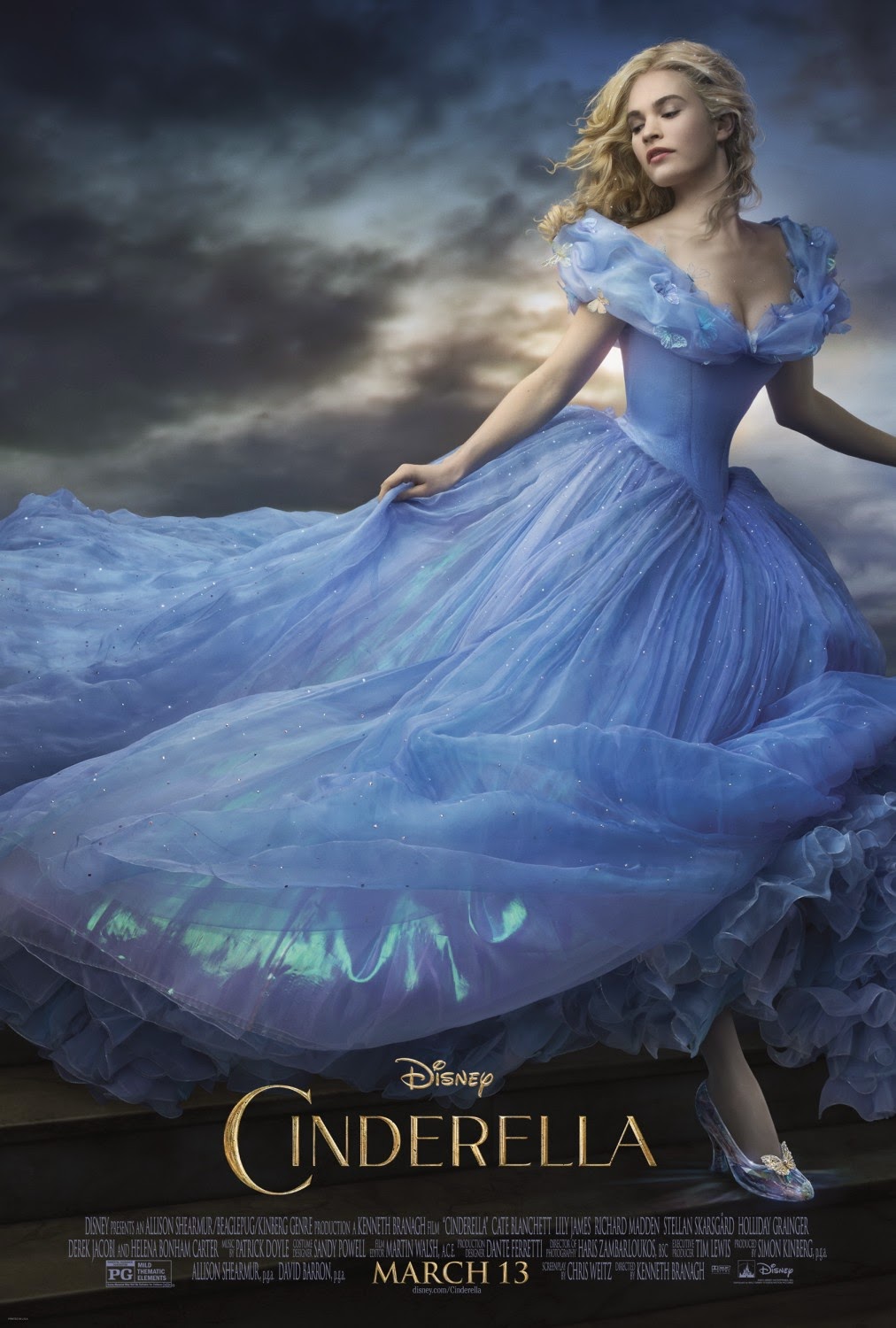 Directed by Kenneth Branagh, Disney's Cinderella is no reboot like most of Hollywood's current releases, but instead an old-fashioned, faithful retelling of the 1950 animated film by the same studio rather than the classic French story. This leads, Cinderella (Lily James) and Prince Charming (Richard Madden) have been selected via two popular television series, Downton Abbey and Game of Thrones. Television has become the 'new film', as we now find film stars heading to television and television leads striking it out on the big screen. It helps that both James and Madden were part of huge ensemble casts of their respective shows and get a chance to stand in the spotlight with Cinderella.

This 2015 version has been sprinkled with lots and lots of magic and goodness. Young Ella (Eloise Webb) has grown up in the most idyllic way possible in the countryside of what seems to be an European kingdom, with two loving parents (Ben Chaplin and Hayley Atwell). This being a Disney film, it means something bad is going to befell them. Ella's mother dies too soon leaving her daughter with one clear message to get her through life, "Have courage. Be kind." Looking around at the state of affairs worldwide, it's a great message to put out to the younger generation because these days, this world doesn't seem to be operating on kindness anymore.

Getting back to the film, Ella (Lily James) grows up to be the model daughter. She's been following her mother's advice all these years. Her father, on the other hand, is still out of sorts after his wife's death. He decides to remarry, thinking he's doing the right thing for Ella and himself. We all know how wrong that is. Ella's new stepmother Lady Tremaine (Cate Blanchett, in an outstanding entrance) and her two harebrained daughters Drizella (Sophie McShera) and Anastasia (Holliday Grainger) walk into her home and her life is never the same.

Her beloved father passes away on a trading journey and Cinderella is left all alone with her new family. Slowly, we see how she goes from being the lady of the house to sleeping by the cinders in the kitchen as a servant girl. One day, while riding her horse, Ella meets the prince of the kingdom out on a hunt. Neither of them reveal who they really are as both of them circle each other on the horse, clearly interested in one another. The prince aka Kit is intrigued by the young woman he meets in the forest and later throws up an invitation to every eligible maiden in the kingdom at the ball where he will choose his bride.

You know what's coming, don't you? This section of the film is vivid, fantastical and quite funny. After her stepmother and stepsisters cruelly keep Ella from going to the ball, she comes across an old woman (Helena Bonham Carter) in her garden. Even in her troubled state, she helps her out offering the weary traveler some milk on her journey. Turns out, that little nothing (an act of kindness) was really something. The old woman was none other than her fairy godmother who wanted to make sure that Ella goes to the ball. She's been watching out for Ella this whole time.

Like the Disney animated version, this Cinderella has the ability to talk to animals. Her mice friends, lizards and even a goose get roped into the scheme to get Ella to the ball. A pumpkin is turned into a grand golden carriage and Ella herself gets transformed wearing the most beautiful blue dress you've ever seen. Elsa's blue Frozen dress has got competition. I was reminded of Scarlett Johannsson as Cinderella in Annie Leibovitz's Disney Dream Portraits in 2008.

Ella goes to the ball making a grand entrance and the rest, they say, is history. There is minimal drama as the prince and Ella lose and find each other again. Stellan Skarsgard plays the Grand Duke, the prince's advisor, who wants to make sure Kit never meets Ella again. But the machinations of the duke and Lady Tremaine can't keep these two apart. Good always prevails and Ella and her prince are made for each other.

There's plenty of technological wizardry going on the film and is the reason why it took over a year to get made. Everything is grand in scope, the kingdom and its enormous castle, the sets and costumes. In fact, costume designer Sandy Powell's creations just about pop on the screen especially if Cate Blanchett is in the scene. She looks exactly like the Hollywood stars of the studio era. Blanchett's evil stepmother brings a steeliness to her role, she's a woman used to getting what she wants always.

James in her first big studio film is well cast as Cinderella, having all the qualities a proper young lady in a fairy tale should. However, I was hoping to see some more feistiness in her Cinderella. I kept thinking back to Drew Barrymore in Ever After (1998) which stayed true to the period while updating the story and the character. In that version, Danielle was no damsel in distress. Fortunately, Richard Madden's Prince has more character than the 1950s animated version's Prince Charming. We get to see grow into his own as the monarch of kingdom wanting to do right for his people.

Nevertheless, this remake has a lot going for it, with a likeable cast and gorgeous visuals. This is Branagh's second big studio film, the other one being Thor, and he's quite outdone himself when it comes to the visuals. I wish he was backed by screenwriter Chris Weitz's script which is quite functional and as mentioned before, seems quaint and old-fashioned in today's world. But therein lies its appeal for many. Superheroes, remakes and storybook tales are back in a big way and Cinderella kicks of the first of the big blockbusters for 2015 aimed directly at families.