In some parts of the world it is still May the Fourth and with a new Star Wars film landing in theaters this Christmas, Vanity Fair displayed the first look of several new characters in the upcoming Star Wars: The Force Awakens. Photographed by the legendary Annie Leibovitz, Star Wars next-gen features Oscar Isaac, Adam Driver, Lupita Nyong'o in their upcoming June issue.

Also featured on the cover along with Daisy Ridley and John Boyega are old friends Han Solo (Harrison Ford) and Chewbacca (Peter Mayhew). 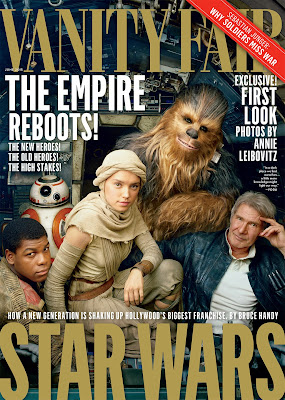 Head on over to Vanity Fair to find out more production details and behind the scenes photos from the set of Star Wars: The Force Awakens. Happy Star Wars Day!
Posted by Sonal at 12:50 AM