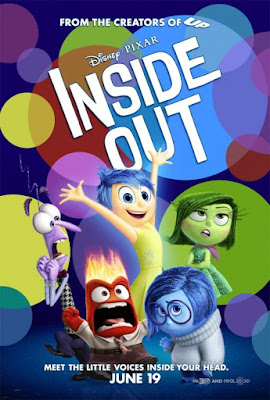 After a self-imposed hiatus, Pixar is back with its 15th feature film with a high-concept story that has managed to touch both adults and children. Director Peter Docter, the mastermind behind Monsters Inc. and Up, brings us another emotional tale with Inside Out.

The majority of the film is set inside the mind of an eleven-year-old Riley (voice of Kaitlyn Dias) a regular young girl who life is uprooted when her family moves from Minnesota to the big city San Francisco. A avid ice-hockey player, moving to the warmer California and being away from her friends and all she know is initially worrisome for Riley but she puts on a brave face for her parents. How do we know this? That's because we have insider access to the inner voices in her head - namely Joy (voice of Amy Poehler), Sadness (voice of Phyllis Smith), Anger (voice of Lewis Black), Disgust (voice of Mindy Kaling) and Fear (voice of Bill Hader).

It turns out Riley's mind is the control room (aka headquarters) where these five differing emotions reside taking decisions that impact her daily life. They are deeply concerned for the well-being of Riley and hilariously help her out of little jams dealing with the fact her new bedroom has no furniture as the moving truck is delayed. Joy is the leader in making sure Riley is always happy and has to constantly manage the rest of the emotions especially Sadness from taking over.

One such day, when Riley is introducing herself at school, Sadness touches a core memory making it turn yellow (joyful) to blue (sadness). It causes Riley to break down in tears and the resulting madness to make the memory happy again causes Joy and Sadness to be sucked down into the long term memory archives. From there on, Riley's core memories as well her personality islands (family, friends, hockey, goofball, etc) are on in danger as Anger, Disgust and Fear are in charge at headquarters and Joy and Sadness have to figure a way back.

Their journey is what makes up the core of Inside Out and they come across Riley's former imaginary friend Bing Bong (voice of Richard Kind) and some hilarious escapades as they try to catch the train of thought back to headquarters. Joy and Sadness both have differing views on how to approach any situation and by spending more time with each other, they both get to understand each other's worth.

Pixar is the king of story in animation and Inside Out is no exception. With the tears (an unexceptionally touching moment with Bing Bong could touch the coldest of hearts) comes loads of laughs and self-awareness as well. The end credits has a particularly fun look inside the minds of several characters we've run into during the film. They've even managed to sneak a Chinatown reference in the film as Sadness and Joy make their way back home.

Kudos to Pixar on the casting of the voice talents. Each actor absolutely shines in their roles. But I've got to admit a little fondness for Sadness. Joy is easily the emotion to like instantly, how could you not? But Sadness slowly grew on me throughout the film as she came into her own personality and became more confident.

The morale of the story Pixar is trying to tell is deeply moving. While we might lose a little joy now and then as we get older, it's quite alright to embrace a little sadness. Is it okay to be sad sometimes? Yes, and that's going to be a profound lesson for youngsters to learn. This will definitely lead to some interesting conversations at the dinner table for parents and children alike. Welcome back, Pixar! We've really missed you.