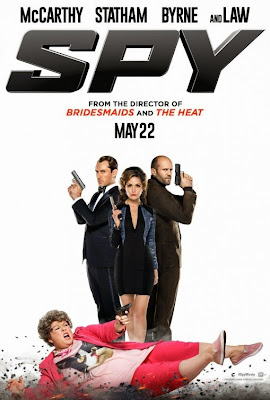 Paul Feig has found his comedic muse in Melissa McCarthy and the results are simply marvellous. Bridesmaids, The Heat, and now Spy have all made me bust a gut in the theatres. Watching a good comedy is so rare these days, in the end, you like some parts but not the whole film. Meanwhile McCarthy has become the de facto queen of summer movies (barring Tammy last year) proving her name alone guarantees time well spent at the movies.

In Spy, she's Susan Cooper, a CIA analyst who has the chops to become an agent, but chooses to stay in the shadows to help Bradley Fine (Jude Law) out on his missions. Obviously, she's also got a hopeless crush on him and he's got no clue. He treats Susan more like his secretary than what she actually is, his right hand woman.

When Fine is tragically killed on assignment and the identity of the rest of the CIA agents has been revealed, it's up to Susan to step up to the plate, expose the villains and save the world from a nuclear bomb. She travels to Paris to set the plan in motion. But first, she must have a new identity as an undercover spy.

Susan wants to be somebody and even her undercover identities are boring and normal. She's easily typecast as a mom of four and owner of ten cats. But as a longtime analyst, Susan has good instincts and backed up by her friend Nancy (the hilarious Miranda Hart), they go about finding Sergio De Luca (Bobby Cannavale) and Reyna Boyanov (Rose Byrne) who the CIA suspect have the bomb.

Throwing a large kink in Susan's plans is former agent Rick Ford (a surprisingly funny Jason Statham) who reminded me a bit of Simon Pegg and Nick Frost's conversation in Hot Fuzz on all the things he's done on the police force. Rather than saving the day, he ends up being more of an impediment to Susan.

Susan, on the other hand, emerges to become a badass bodyguard to Reyna (take that, Midwestern mom!). This was, by far, my favourite part of the movie. All of sudden, Susan's not hesitant or scared anymore. She goes for it 100%. She gives herself a makeover, makes grown men cry and kicks  some serious ass. All this with an extremely potty mouth. It was glorious.

You know a film is good AND funny when not only are you laughing but also repeating the lines to yourself because it's that entertaining. I found myself doing that quite a bit. McCarthy and Feig will reunite once again for the Ghostbusters reboot next summer all but guaranteeing McCarthy's summer reign will continue. I can't wait.